The Chatham-Savannah Counter Narcotics Team (CNT) announced the seizure of a large amount of cocaine, guns, money and the arrest of several people.

In February, CNT began investigating a drug complaint forwarded by CrimeStoppers in reference to1315 Golden St. "The complaint advised of suspected drug activity occurring at the residence throughout the day and night," a spokesman says. CNT Agents, working in an undercover capacity, successfully made purchases of cocaine from persons associated with the residence.

As the investigation continued, CNT identified a second residence at 2106 Mell St. connected to 1315 Golden St. Agents furthered the investigation and began purchasing cocaine from both residences. Shortly after identifying the Mell Street address, CNT subsequently received a new drug complaint from CrimeStoppers listing 2106 Mell Street as a residence where drugs sales were taking place.

Most of the seized cocaine was crack, with an estimated street value of up to $80,000. Of the recovered firearms, two of the firearms were reported stolen and at least one rifle was found to be of a high caliber, capable of piercing body armor. 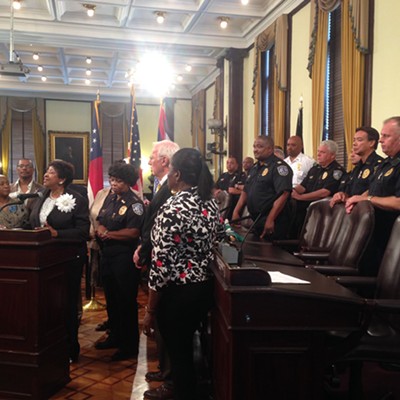