The Economic Monitor, which analyzes data and identifies trends affecting the regional economy, reports across-the-board growth in all eight indicators tracked to assess the current state of the economy.

“Savannah’s economy has been strengthening and should continue to do so for the rest of the year,” said Michael Toma, Fuller E. Callaway Professor of Economics and the Director of Armstrong’s Center for Regional Analysis (CRA). “In the first quarter of 2014, a significant improvement in the housing market was coupled by notable uptick in the labor market. In addition, we’re seeing the fastest nine-month pace of economic growth recorded since 2006.”

In the first quarter of 2014, the coincident index pushed above the pre-recession peak of 2007, while the forecasting index increased.

"The combined message from both indices is that Savannah’s economy is growing in a healthy and sustainable manner," said a CRA spokesperson.

For the previous three quarters, the leading index has increased at an average annualized pace of 12 percent, the fastest consistent nine-month period of gains since late 2009, when the economy was emerging from recession. In addition, the local leading economic index continued its surge through the first quarter of 2014, extending its period of rapid growth to three consecutive quarters.

· The regional coincident economic index surged 1.4 percent to 164.0. This marks an annualized pace of 5.7 percent and comes on the heels of the rapid 4.4 percent growth at the end of 2013.

· The regional tourism industry continues to fare well in 2014. Hotel and motel room receipts are 7.4 percent ahead of previous year data through the first quarter. Employment in the leisure/hospitality sector increased by 800 to an all-time high of 24,100 jobs.

· The seasonally adjusted number of new residential homes permitted for construction dipped to 324 from 337, a 3.4 percent decline. The average value of a building permit issued for a single family home increased two percent, rising to $210,300 from $206,500.

· In the labor market, seasonally adjusted initial claims for unemployment insurance fell about 10 percent to 888 claims per month during the quarter, marking the slowest pace of new claims in nearly six years.

The Coastal Empire Economic Monitor presents quarterly economic trends and short-term economic forecasts for Savannah’s Metropolitan Statistical Area (MSA). The report measures the local economy based on analysis of economic data from the U.S. Census Bureau, the U.S. Department of Labor’s Bureau of Labor Statistics, the City of Savannah, Georgia Power and the three counties in the MSA—Chatham, Bryan and Effingham.

The report presents a short-term forecast of the region’s economic activity in the next six to nine months and is available free by email. To subscribe, email CRA@armstrong.edu.

Bike vs. Car at Thursday's 'Dump the Pump' 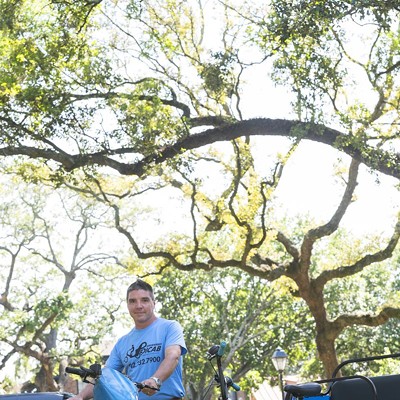