Police have filed multiple charges against a Pooler man who led five agencies on a 50-minute automobile pursuit after a car-jacking robbery Thursday night.

Jordan Christopher Oneal, 21, was charged with armed robbery, hijacking a motor vehicle and fleeing to elude police officers. He also has been charged with agg
click to enlarge 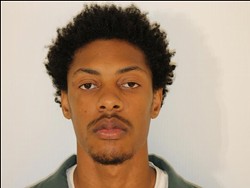 He was pursued by SCMPD, Port Wentworth, Garden City, Pooler and Georgia State Patrol officers at speeds more than 100 miles per hour before he abandoned a stolen vehicle in a Pooler neighborhood, climbed a fence into an apartment complex and was taken into custody by waiting Metro officers.

Patrol officers had responded to an apartment complex on the 100 block of Benton Boulevard near Pooler about 9:30 where a resident reported he had been robbed of the keys to his white 2013 Jeep Patriot at gunpoint.

The Jeep passed another  officer on Interstate 95 and led officers from the five agencies through Savannah’s south side, out Chatham Parkway and back to the Pooler area.

Police Chief Julie Tolbert commended the efforts of the five agencies for the precise handling of the pursuit that ended with no injuries and no property damage.

“This was a testament to the various officers and their intense and consistent training,” she said. “It allowed officers from various department who rarely if ever have opportunities to train together to respond in unison to safely address the issue. My compliments go out to every officer involved.”