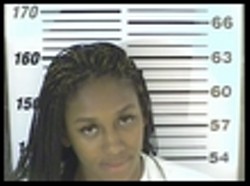 Detectives are seeking help from the public to locate a woman charged after a fight at a school bus stop Monday Jan. 12.

Savannah-Chatham Metropolitan Police have warrants charging Nelaunte Grant, 20, with aggravated battery, criminal damage to property and three counts of cruelty to children in the first degree.

She was identified as "the woman who broke the windshield of a car and cut a 26-year-old woman with a knife during a fight between several women at a school bus stop a Liberty Parkway and Vasser street about 4:15 p.m. Monday," police say.

The victim was transported to a hospital for treatment.

Anyone with information on her location is asked to call Crimestoppers at (912) 234-2020 or text CRIMES (274637) using the keyword CSTOP2020. Tipsters remain anonymous and may qualify for a cash reward.