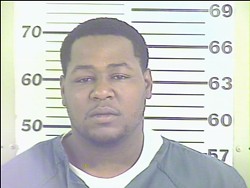 Michael Antwain Whitaker
Three suspects were arrested Wednesday "during the service of a search warrant, including a juvenile and a male who injured two police officers and endangered two children in an attempt to drive away," police say.

Michael Antwain Whitaker, 25, was charged with two counts of felony obstruction, two counts of cruelty to children in the first degree, reckless conduct and theft by receiving stolen property. He was taken into custody after he dragged a Metro detective in an attempt to drive away from the scene on Weiner Drive about 9:30 a.m.

Also arrested were the subjects of the search warrant being served by Savannah-Chatham Metropolitan Police: Darien JaRell Cody, 21, and a juvenile, 16.

Crime Suppression Unit officers and detectives from the Southside Precinct were serving the warrant at Cody’s residence for the Feb. 6 burglary of a business on the 300 block of East Montgomery Cross Road.

"Police had detained Cody and the teen when Whitaker was found hiding in a bathroom," police say.

"Police momentarily released him to comfort two young children in his vehicle when he sped away, dragging a detective from the passenger door while two other officers tried stop him. He was taken into custody after an officer deployed a taser. Neither of the officers received serious injuries."

Whitaker has "an extensive record of arrests by Metro Police, including a February 2011 charge of possession of a firearm by a convicted felon and a March 2011 probation violation," police say.

Investigations into the burglary and the arrests this morning are continuing.

Roofer falls to his death