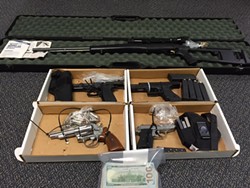 "CNT recovered various prescription pills, six firearms and a large amount of ammunition. CNT also recovered more than $6,200 in cash. One person was arrested at the time of the search warrant and was determined to be a convicted felon," CNT says.

CNT began its investigation into the residence in early March. "During the course of the investigation, undercover CNT agents purchased various types of prescription pills and discovered firearms were being stored at the residence," they say.

The name of the person arrested and exact location of the residence is not being released at this time because the investigation is ongoing and more arrests are expected.