Metro Traffic officers are investigating a two-vehicle crash that left a pedestrian in serious condition Tuesday morning May 19.

Samuel Preto, a college exchange student from Brazil, was transported to Memorial University Medical Center after he was pinned between a car and a utility pole, se
click to enlarge 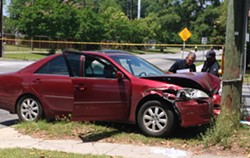 "The crash occurred at Montgomery and West 52nd streets about 11:30 a.m. when a 2005 Volkswagen convertible driven south on Montgomery by a 19-year-old college student attempted a left turn onto 52nd," police say.

"The Volkswagen collided with a maroon 2002 Toyota Camry driven north on Montgomery by a 32-year-old Brandon, FL, woman. The Toyota veered onto the curb and head-on into a wooden utility pole on the north-east corner, pinning Preto who had been waiting to cross the street."

Multiple units from Savannah Fire and Rescue responded immediately from an unrelated call a block away and quickly removed Preto from the wreckage. The driver of each vehicle and the passenger in each of the cars were transported to Candler Hospital for treatment of non-life threatening injuries.

Officers from the Major Accident Investigation Team of the Savannah-Chatham Metropolitan Police Department continue to investigate.