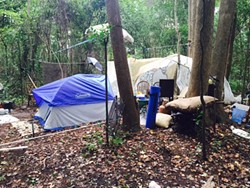 "Two men are arrested following an investigation into a homeless camp by the Chatham-Savannah Counter Narcotics Team (CNT)," a spokesperson says.

With the assistance of SCMPD Precinct V Crime Suppression Unit, the camp sites were checked for evidence of methamphetamine manufacturing.

"During the search, CNT agents found three separate locations that contained evidence consistent with manufacturing. All three locations were located in the same general area behind the old SuperGoose Sports building located at 3700 Wallin Street."

The locations consisted of two tents, a makeshift treehouse and three shopping carts.

Earlier this morning, CNT returned to the homeless camp and arrested 28-year-old David James Harry and 55-year-old Charles Wayne Burroughs. Harry is originally from Pennsylvania where he is currently wanted for DUI and Possession of a Controlled Substance. "Burroughs appears to be a longtime homeless Savannah resident," CNT says.

Both men have been charged with Manufacturing Methamphetamine and are currently being held at the Chatham County Detention Center. They are expected to be arraigned Monday, September 21, 2015, in the Recorder’s Court of Chatham County.