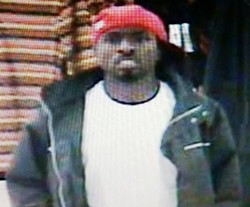 Detectives ask the public’s help in identifying the suspect who opened cash registers in at least six stores to steal or attempt to steal money.

The suspect targeted stores in east Savannah and the Southside between Sept. 20 and Oct. 20. "In each case hand tools were used to pry registers open during business hours," police say.

The suspect is described as a black male, standing roughly 6-2 and weighing about 190 pounds.