Detectives obtained an arrest warrant for Reginald Johnson, 26, after a Wednesday night shooting on Sterling near Wheaton Street, that claimed the life of John Williams, 22.

On Thursday afternoon Johnson turned himself in at Savannah-Chatham Metropolitan Police Headquarters. He was arrested without incident and charged with murder.

At about 8:19 p.m. Metro responded to the scene where Williams was found suffering from a gunshot wound. Williams was transported to Memorial University Medical
click to enlarge 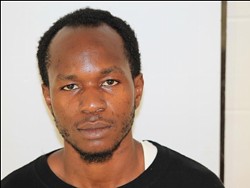 Center where he was pronounced deceased.

"Investigators believe Williams was shot during a verbal altercation with Johnson. Detectives also believe, this altercation may have stemmed from an ongoing feud between the two men," police say.

Johnson is described as a black male standing 6 feet and weighing roughly 140 pounds. He drives a white 2007 Chevrolet Impala or Malibu. Johnson frequents Fred Wessels Homes.
Johnson faces murder charges. He is believed to be armed and dangerous. Any citizen who sees Johnson should not approach him, but should call 911 immediately.