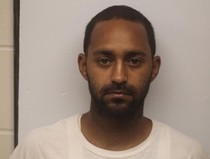 Jones
Shots fired inside a Bay Street club led to a shootout in the nearby Whitaker Street garage, with four people being injured. One man is in custody and another suspect at large.

"Someone fired shots inside Club Rain on W. Bay St early Saturday morning. No one was hit and all of the patrons left the club. A few minutes later, at approximately 2:00 a.m., an altercation took place between two parties inside the Whitaker Street Parking Garage which turned into a gun battle," police say.

"Four people were shot and were located by officers in various locations in and outside the garage. None of the victims sustained life-threatening injuries."

"Three of the men who were shot were with the parties that were involved in the altercation. They are Deshaun Kinlaw, 30, of Savannah, Malcolm Washington, 24, of Atlanta, and Joshua Karruth, 22, of Savannah," police say.

"The fourth victim, Darryl Greenwood, 30, from Parris Island, SC was shot in the hip while inside his vehicle. He was attempting to leave the parking garage. He was not involved in the altercation,"police say.

"Investigators believe there were two shooters. Police arrested one of the shooters, Christoper Jones, 29, of Savannah. The second shooter is still being sought."