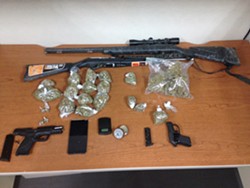 "Just after 6 p.m., Metro’s UNIT, SWAT and Patrol Division responded to a residence on the 5600 block of Emory Drive. Upon Metro’s arrival, several people were located in and outside of the residence. Metro was able to seize four firearms and two pounds of marijuana after executing the search of the residence," police say.