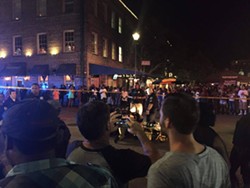 "The victim, 25 year old Keenan Gray, is a U.S. Army soldier stationed at Hunter Army Airfield. Gray was downtown with friends. Gray was shot after an altercation with an unknown suspect(s)," police say.

Gray was transported by Southside Fire/EMS to a local hospital and is in critical but stable condition. 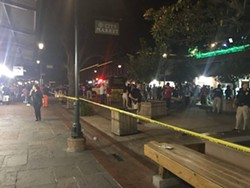 Photo by Taylor McMasters
The scene about 1 a.m. in City Market