"A convicted felon is back in jail following an operation conducted by the Chatham-Savannah Counter Narcotics Team," a CNT spokesman says.
click to enlarge 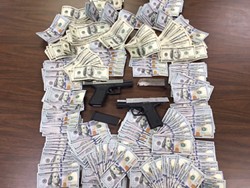 Early yesterday afternoon, CNT, with the assistance of Georgia Pardons and Parole, conducted a search of a residence located in the 200 block of Seminole Street.

CNT also seized two firearms, one of those was reported stolen, and more than $42,000 in U.S. currency. CNT arrested 36-year-old Jabril “Taco Flacco” Whitehead of Savannah. Whitehead is being held in the Chatham County Detention Center.

"CNT began its investigation into Whitehead after receiving information he was possibly distributing controlled substances. Whitehead was on parole for drug convictions at the time of his and has been previously arrested by CNT," they say.