Metro officers responded to the 2100 block of Benton Boulevard at around 11:30 p.m.

"Reportedly, the male suspect walked into the store and demanded cash. The employee complied with the suspect’s demands. The suspect fled the store in an unknown direction," says Keturah Greene of the SCMPD Public Affairs Office.
click to enlarge 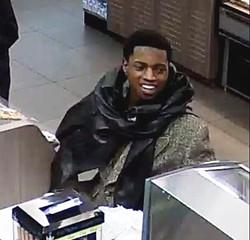 The suspect is described as a black male in his mid-20s with a slim build. During the incident, he wore a trench coat, a wind breaker around his neck, plaid pajama pants and socks with no shoes.

Information may also be forwarded to CrimeStoppers at (912) 234-2020. Tipsters remain anonymous and may qualify for a cash reward.

Editor's Note: The urge to unmerge and what it really means