"Brown had been on the run since he left the shelter he was living in," said Peter Nichols of the Chatham County Sheriff's Office.
click to enlarge 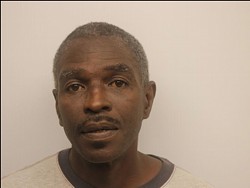 Because of this probation violation and his failure to register as a level 2 sex offender a warrant was sworn out on him on April 6th. Brown was recently featured on WSAV’s Fugitive Files which lead to a tip to his whereabouts and his arrest today.

Andrew Brown is a level 2 Sex Offender which means that he is likely to reoffend.