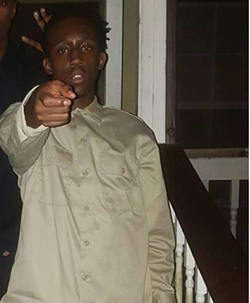 Tanaiveon Johnson, 17, is wanted in association with the death of Arraffi Williams, 18
Less than 12 hours after the shooting, Savannah-Chatham Metropolitan Police Department’s Investigators "identified a subject involved in the circumstances leading up to the shooting death of a 18-year-old man," police reported early this morning.

Around 12 p.m. on September 13, officers responded to a shooting call in the area of East 31st Street and Bee Road. Upon arrival, they found Arraffi Williams, 18, suffering from life-threatening injuries. Williams succumbed to his injuries at the scene.

"Investigators determined that Williams was in the area with Tanaiveon Johnson, 17, at the time of the shooting. Johnson and Williams were involved in an exchange of gunfire with another group of subjects in the area. At least one party from each group fired shots," police say.

Williams was struck during the exchange.

"Investigators found that Johnson’s felonious actions during the incident led to Williams’s death. Accordingly, he is wanted for one count of felony murder and three counts of aggravated assault," police say.

Anyone with information on Johnson’s location is asked to call 911. A confidential tip line is also open directly to investigators at (912) 525-3124.