"Information provided by first responders indicates overcrowding does not appear to have been a factor" in Saturday's deck collapse at Rogue Water Tap House which hospitalized 14 people during the St. Patrick's Day celebration, the City of Savannah said today.

"City of Savannah’s Department of Development Services issued a Certificate of Occupancy (CO) for 38 Martin Luther King, Jr. Blvd. in 2002 when the deck was initially constructed," a City spokesperson says. "Upon issuance of the CO, the City does not have any ongoing responsibility to inspect the building. The responsibility to inspect and maintain the building falls on the property owner."

The latest Savannah Fire fire marshal inspection occurred on February 28 of this year. However, Savannah Fire does not inspect buildings for structural soundness, just to set building capacity for fire safety purposes. The set maximum occupancy load for the building is 165.

"On Saturday, Savannah Fire required the property owner to close off access to the deck and exterior courtyard immediately following the incident. The deck area is isolated from the rest of the establishment," the City says. 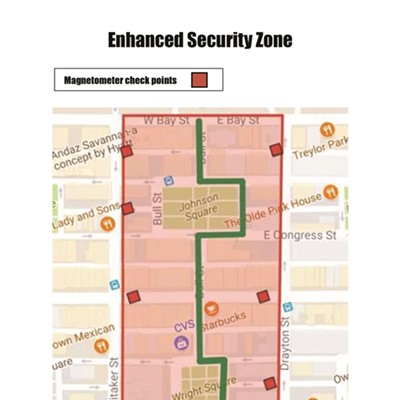