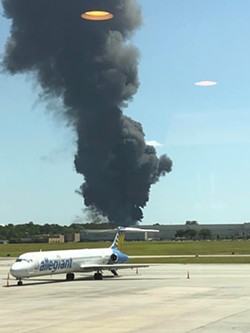 Lee Tone/LMFT
A citizen photo of the crash in the background.
At least two are dead in the crash of what reports say is a Puerto Rico Air National Guard C-130 on approach near Highway 21 in Port Wentworth.

The military transport reportedly was carrying a total of five people; no word as of this time as of the condition of the other three. (UPDATE: An Air Force spokesman confirms that all five are deceased.)

No others were injured on the ground in the crash, according to reports.

The incident happened around noon today, with the crash clearly visible to many people either driving or outside.

All roads at the site are closed. Port Wentworth Elementary and Rice Creek School have reported power outages due to the crash but no injuries.

Savannah-Hilton Head International Airport as of now is not altering airline schedules. The crash did not occur at the airport itself.

The 165th Airlift Wing of the Georgia Air National Guard, which would have hosted the aircraft, is based at a nearby facility which served as the former Savannah airport prior to construction of the current airport.