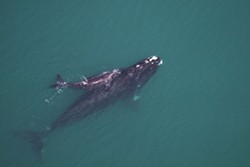 This controversial process backed by the Trump administration is used to search for oil and gas deposits deep below the ocean’s surface, and is a first step toward offshore drilling.

“With a vibrant commercial fishery industry and the only known calving ground for endangered North Atlantic right whales just off our coast, Georgians oppose seismic testing for offshore oil exploration and the threats it poses to our state’s wildlife, wild places, and quality of life,” said Alice Keyes, vice president at One Hundred Miles.

Already critically endangered due to net entanglements and ship strikes, the whales might be at a crucial tipping point.

"Last year there were no documented births" of right whale calves, Keyes said.

"Right whales will keep spiraling toward extinction if we don’t stop these deafening blasts and the drilling and spilling that could come next. That’s why we’re taking the administration to court.”

Those permits authorize five companies to harm or harass marine mammals while conducting seismic airgun blasting in an area twice the size of California, stretching from Cape May, New Jersey to Cape Canaveral, Florida.

Some estimates say the sound and concussion from the blasting can cover a maritime area equivalent to the distance between New York and Los Angeles.

Cunningham said the first bill he will sponsor when he takes office next month will be a bill to reverse the Trump administration's backing of the policy.

"As a former ocean engineer I know how destructive offshore drilling can be," Cunningham said.

She said it's also important to call Georgia Governor-Elect Brian Kemp and "ask him to officially oppose seismic testing" in the wake of a campaign promise that he would oppose offshore drilling.

In April 2017, President Trump issued an executive order to expedite permitting for harmful seismic airgun blasting, reversing the previous administration’s decision to deny all pending permits for such activity in the Atlantic.

“The Trump administration has steamrolled over objections of scientists, governors and thousands of coastal communities and businesses to enable this dangerous activity. Now it wants to steamroll the law,” said Michael Jasny, director at the Natural Resources Defense Council (NRDC). “Allowing seismic blasting at this scale in these waters is not consistent with the laws that protect our oceans.”