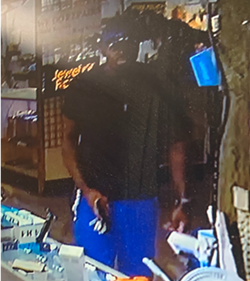 The alleged suspect
On July 13, 2019, Chatham County Police responded to a report of a stolen cellphone at Keller’s Flea Market on Ogeechee Road.

"The victim told police that one of his customers stole a iPhone 7 Plus cellphone off the counter. The suspect is described as a black male and was wearing a blue hat, black shirt, and blue shorts at the time of the theft," police report.

Anyone who knows the suspect’s identity or whereabouts is asked to call Chatham County Police at 912-652-6920 or Crime Stoppers at 912-234-2020. CrimeStoppers tipsters are anonymous and may qualify for a cash reward.

'Coffee With A Cop' events scheduled