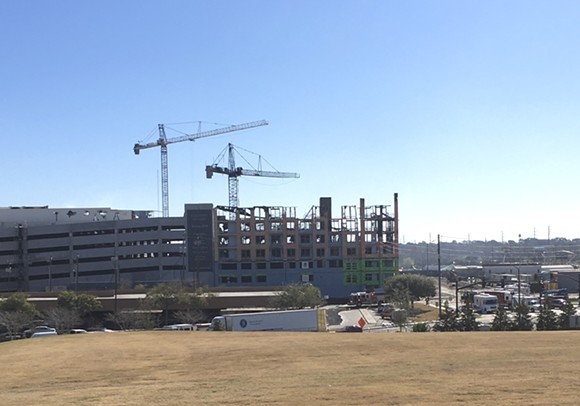 Photo by Jim Morekis
The scene at Eastern Wharf the morning after the fire. Fire crews remain onsite to continue containment of still-hot areas.

Separate sources indicate that the investment group behind the Eastern Wharf development plans to continue with construction after Thursday's devastating fire at a residential portion of the development — embers of which are still burning Friday morning.

"My understanding is the developers plan to rebuild," said Mayor Van Johnson at Thursday's City Council meeting — the first evening meeting in living memory, after a schedule change to allow more citizens to attend.

An attorney for the developers also confirmed the development will go ahead.

"The developers of Eastern Wharf are committed to this project" and will continue building it, said attorney Harold Yellin during a Council discussion of a new signage ordinance for Eastern Wharf.

The sprawling site just east of the Historic District — twice as large in area as Forsyth Park — is its own Planned Unit Development (PUD), and as such can develop its own internal ordinances separate from other areas of the city.

Last night's decision on signage, however, was delayed a month to give time for more citizen input and for First District Alderwoman Bernetta Lanier to become more involved.

Mayor Johnson said of the blaze that  "a ton of mud and a complicated layout have made it especially difficult" for first responders. "I thank God no one was hurt... I cannot tell you how proud I am of not only our professional firefighters, but our police officers on site."

In the wake of the fire, concerns emerged about taxpayers' stake in the project — $33 million in City bonds to pay for the parking garage immediately adjacent to where the fire blazed.

"The City has no financial stake in this project until we accept the garage when the construction is complete," responded Mayor Johnson.