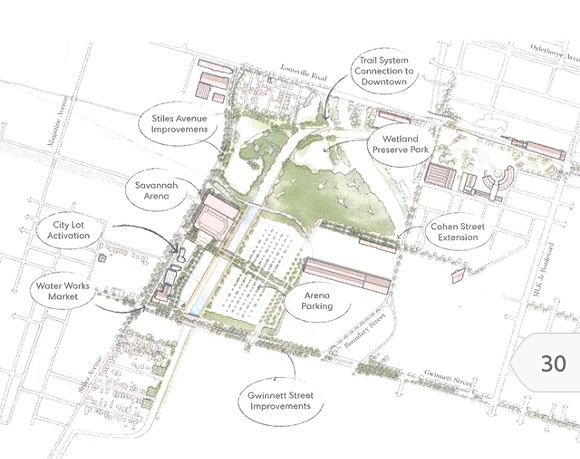 An inset from the Canal District Master plan.

At today's City Council workshop, members of Council debated how the impact of COVID-19 may affect the ambitious plans for the Canal District in West Savannah, and the future Savannah Arena contained within it.

"The way we live and congregate possibly could be impacted the rest of our lives," said Alderwoman Kesha Gibson-Carter. "Is it still feasible for us to build a 9000-seat capacity arena here in Savannah, Georgia?"

Pointing out that the Arena and Canal District are "reliant on SPLOST dollars that in large part haven't been collected," Gibson-Carter asked, "If SPLOST doesn't come through, what is Plan B?"

(SPLOST is the Special Purpose Local Option Sales Tax, a voter-approved one-percent countywide sales tax which must by law go only to fund capital and infrastructure projects.)

Alderwoman Bernetta Lanier, in whose district the whole project will be, said "We need to insert some type of exit strategy in these contracts" for the Arena and Canal District in case the economy and budget make the project infeasible.

To which City Attorney Bates Lovett said, "That's certainly something we can start adding as we negotiate."

Alderman Nick Palumbo pointed out the epic size of the entire project, widely considered the largest single project the City of Savannah has ever undertaken in its history.

"The timeline moves out much much farther than we're used to planning for. I've seen the year 2075 mentioned," Palumbo said.

"I think it's really important that we find a way to let this project grow organically.... to attract private investment that will fund that tax allocation district" contained within the project, he said.

Mayor Van Johnson strongly pushed back on the idea of reconsidering the Arena.

"COVID 19 is not going to be the end of Savannah. Things might look really bad, but Savannah has survived a lot," he said.

"COVID-19 has a time and a season. We will be back in each other's presence again.... and we have to work toward that day," the Mayor said.

"We have always said the Arena couldn't survive by itself, hence the need for a Canal District to provide the accoutrements necessary to maintain an arena," the Mayor said.

Gibson-Carter urged that the Arena project not come at the expense of improving the living situation of residents in the surrounding neighborhoods, many of whom are economically disadvantaged and live in areas that frequently flood.

"It takes more than just an agreement or acknowledgement that something will happen [to help them]. What we want to see is policies attached to matters like a health impact assessment and community benefits agreement," she said.

"Putting the cart before the horse will essentially put these communities further at a disadvantage."

A vote on the budget and outline of the Canal District is tentatively scheduled for late June, after a period of public comment throughout May.

Who's open: Takeout and delivery