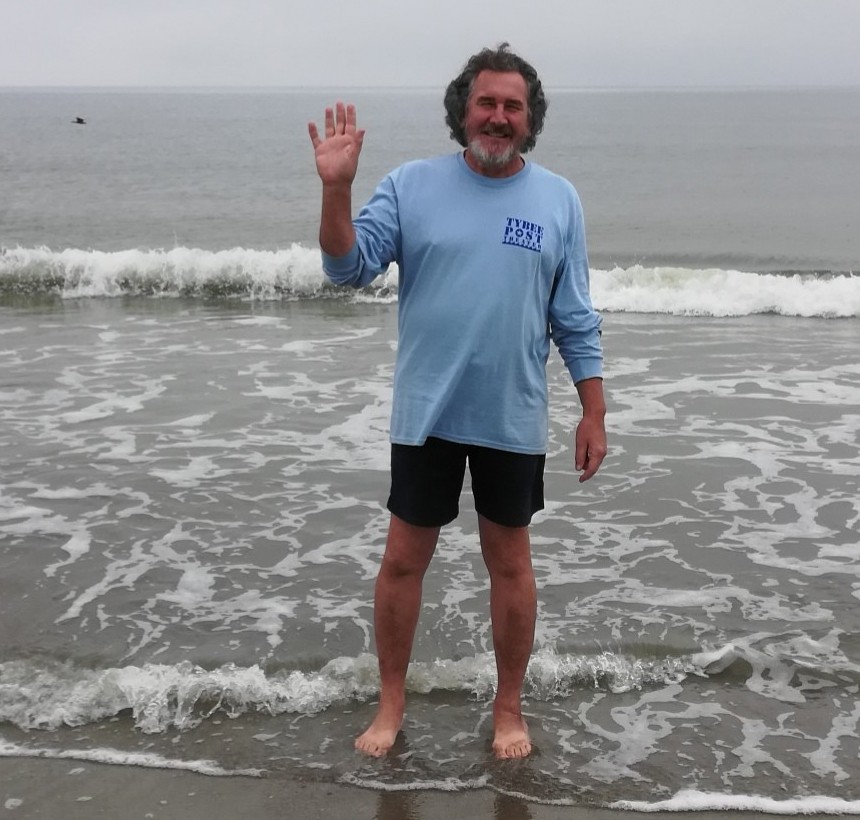 Courtesy of the Tybee Post Theater
Tybee Post Theater projectionist Steve Johnson demonstrates how to participate in the Jan. 1, 2021 virtual Polar Plunge.
Amid mixed messages being spread by online media sources about plans for Tybee Island’s annual Polar Plunge event on Jan. 1, 2021, organizers are reiterating that the popular fundraiser will only be held virtually to help avoid the transmission of COVID-19, emphasizing that no official activities will be occurring for the event at its usual location beside the pier on New Year’s Day. Held annually as a fundraiser to support the Tybee Post Theater, the Polar Plunge ordinarily welcomes hundreds of hardy souls in wild costumes to start the New Year by wading into the Atlantic along a stretch of beach adjacent to Tybee Island’s pier. However, in early November organizers announced that the Polar Plunge would be held virtually because Tybee Island’s municipal government is currently not issuing event permits to prevent the spread of COVID-19 at mass gatherings. For the virtual Polar Plunge, participants on Tybee Island are still welcome to individually take a chilly dip anywhere along the shoreline and submit photos or videos of their feat, while anyone who wants to participate from anywhere else can do the same, according to Tybee Post Theater Executive Director Melissa Turner. “We wanted to do the Polar Plunge because it’s a Tybee tradition, and it has been for 22 years now,” Turner said, adding that the event has grown so popular that holding it amid the ongoing pandemic would pose too much of a risk of it becoming a super-spreader event. “We didn’t want to encourage thousands of people out there on the pier. … I hope people don’t go there and expect a big party and a parade and all that.” Some online news sources have incorrectly stated that Polar Plunge participants can take part in the event either virtually or by joining others at the Tybee pier on New Year's Day. Turner said that anyone who visits the pier on Jan. 1 will find no organized Polar Plunge events occurring.
click to enlarge 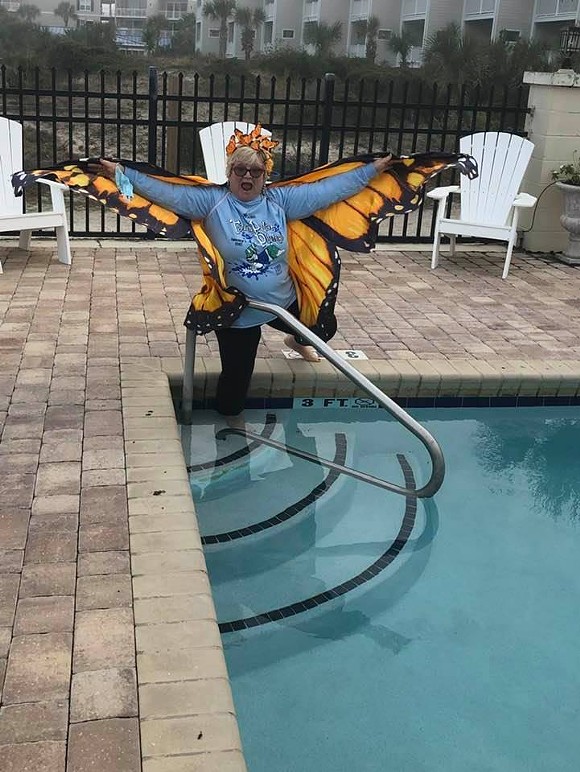 Courtesy of the Tybee Post Theater
Kathy Black-Dennis with Friends of the Tybee Theater demonstrates how to participate in the Jan. 1, 2021 virtual Polar Plunge.
But while the usual Polar Plunge antics will not be held at the pier on New Year’s Day, the Tybee Post Theater is carrying on its tradition of selling Polar Plunge long-sleeved T-shirts. “The sales have gone so well, I just placed an emergency order for more shirts,” Turner said, noting that the shirts can be shipped to event supporters. According to Turner, this fundraiser is crucial for the ongoing operations of the Tybee Post Theater, which has already lost considerable revenue after closing for much of 2020 because of the pandemic. In November and December, the theater screened a series of Christmas movies with limited capacity to allow for social distancing among the audience and other COVID-19 precautions, but currently there are no plans for the theater to reopen until the pandemic subsides. Nonetheless, Turner hopes that the virtual Polar Plunge will still provide the Tybee community with a much-needed lighthearted event to begin 2021. “It’s just one of those happy things that you don’t want to miss in a year like this,” Turner said. Visit tybeeposttheater.org/tybee-polar-plunge for more information about participating in Tybee's virtual Polar Plunge.