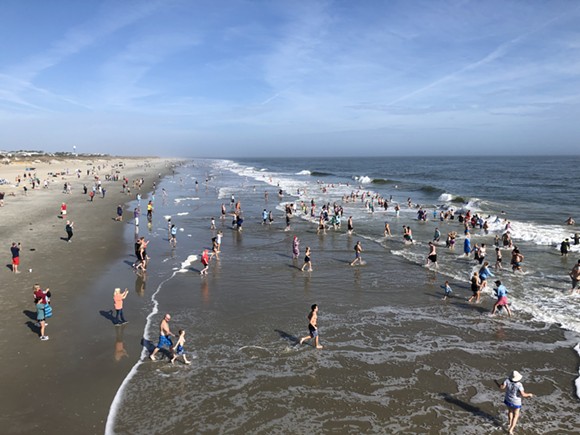 Nick Robertson/Connect Savannah
Hundreds of hardy waders rush into the Atlantic on New Year's Day at Tybee Island.
At least 200 hardy waders gathered on the north side of Tybee Island’s pier to take a traditional New Year’s Day dip in the chilly Atlantic, despite official Tybee Polar Plunge activities only occurring online this year as a precaution against spreading the COVID-19 pandemic. While Tybee Island’s pier and surrounding beaches are usually packed with Polar Plunge events every New Year’s Day, organizers decided to make the event virtual in November, encouraging anyone to take a Jan. 1 swim anywhere and submit a video or photo of their feat for an online celebration. Proceeds from participating in the Polar Plunge boost the Tybee Post Theater. However, December media reports announced that the Polar Plunge would be held in person, leading event organizers to emphasize that the event was virtual-only and that no official events would be held by the Tybee pier.
click to enlarge 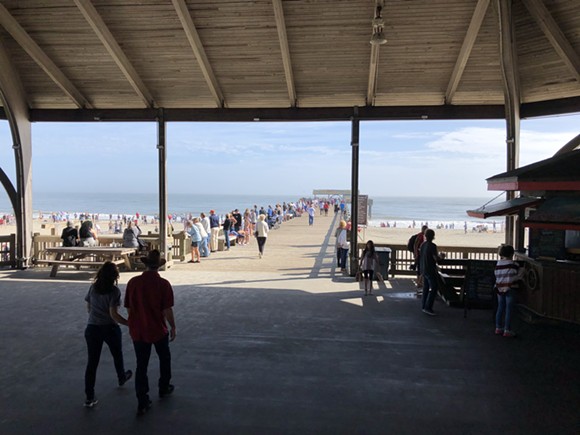 Nick Robertson/Connect Savannah
The Tybee Island pier, ordinarily packed on New Year's Day with Polar Plunge participants, still drew many people to watch the waders.
Nonetheless, by 11:50 a.m. on Friday, Jan. 1, some 200 waders had gathered at the pier-side beach area ordinarily sectioned off on New Year's Day for Polar Plunge participants, while about another 200 people lined the northern pier railing to see this spectacle held regularly for the previous 22 years. A few waders wore silly costumes in full Polar Plunge spirit – including people dressed as Superman, Ursula the Sea Witch, and Santa with a gingerbread man – while several wore their official 2021 Polar Plunge long-sleeved t-shirts, and most wore bikinis and swim trunks to take full advantage of the unseasonably sunny New Year’s Day.
click to enlarge 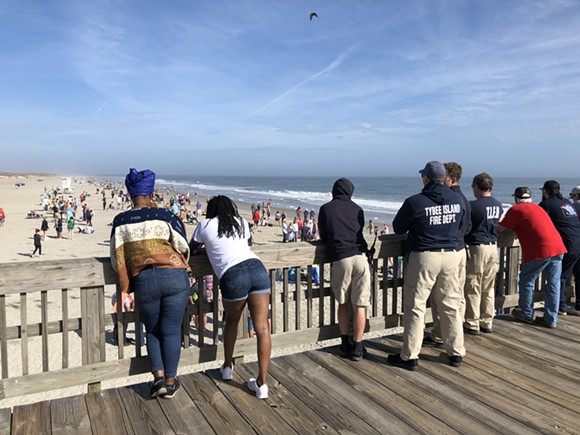 Nick Robertson/Connect Savannah
Spectators watch the New Year's Day waders from Tybee Island's pier.
Although no Polar Plunge officials were apparently present, two Tybee Island Fire Department units were on hand during Friday’s unofficial gathering, and several TV reporters were there to capture the event. Most participants followed social-distancing practices, and some wore masks while on the shore. Ordinarily, a Polar Plunge emcee leads an amplified countdown to noon, at which point the waders all rush into the ocean at once. Lacking such an organized start on Friday, the rush into the waves was more haphazard; a couple minutes before noon, a few small groups began running toward the water, and the rest soon followed with their usual loud cheers and exclamations of shock once immersed in the wintry brine.
click to enlarge 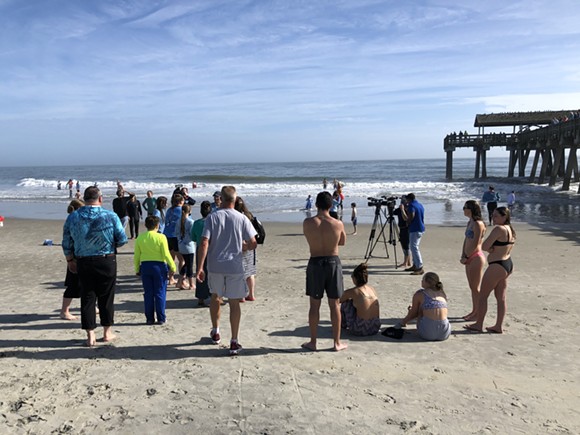 Nick Robertson/Connect Savannah
Hardy waders dry off a few minutes after rushing into the Atlantic on New Year's Day at Tybee Island.
This was not the first time that a cherished Tybee tradition carried on in some form or another after officially being canceled due to the coronavirus pandemic. In December, the Tybee Christmas Parade was not held, but a semi-sanctioned Christmas Caravan popped up instead – and on March 14, when Tybee's St. Patrick's Day Parade was canceled that morning, hundreds of participants took to the streets anyway in a renegade parade amid open traffic.