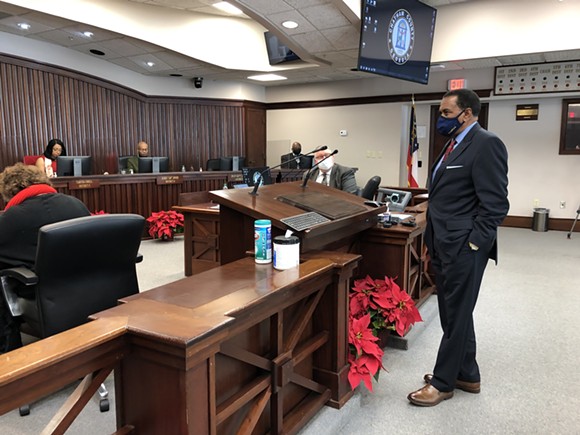 Nick Robertson/Connect Savannah
Outgoing Chatham County Commission Chair Al Scott, standing at the podium, during his final meeting while still in charge on Dec. 18.
The Chatham County Commission will soon feature several new faces when the current administration – led by Chairman Al Scott, who has served two consecutive terms in his role since early 2013 – will come to an end on Jan. 4, 2021. Scott, a political trailblazer with a long record of service in Georgia state government, was prevented by term limits from running for the county’s top elected office for a third time. He will be replaced by Chester Ellis, who will advance to the chairman seat on Jan. 4 after serving a single term as the county’s District 8 Commissioner. Four other current commissioners will continue serving on the board after winning a new four-year term in the Nov. 3 general election: Helen Stone of District 1, Bobby Lockett of District 3, Pat Farrell of District 4, and Dean Kicklighter of District 7. The new commissioners set to be inaugurated on Jan. 4 are Larry “Gator” Rivers of District 2, Tanya Milton of District 5, Aaron “Adot” Whitely of District 6, and Kenneth Adams of District 8. The new commission’s inauguration ceremony will be held at the board’s headquarters within downtown Savannah’s Old County Courthouse at 11 a.m. on Jan. 4. With space extremely limited for viewing the ceremony in person so as to abide by COVID-19 social-distancing guidelines, the in-person audience is primarily restricted to family and friends of the commissioners. However, the ceremony will be broadcast live on local Comcast channel 16, as well as by livestream on the county website (chathamcountyga.gov) and on the Chatham County Georgia Facebook page. During the current County Commission’s final meeting on Dec. 18, the board’s four departing members were honored with a presentation of wooden plaques engraved with some of their accomplishments from their time in office. Outgoing Commissioner Yvonne Holmes of District 2 – who has only filled this role by special appointment since September to finish out the term of her late husband, James Holmes, after his passing in August following a battle with COVID-19 – thanked her fellow board members when accepting her plaque, which was also engraved with her husband’s accomplishments. “Thank you so much for allowing me to serve the rest of James’ time here. It’s been quite rewarding,” said Holmes, a retired pediatric nurse who worked for many years at Memorial Health. “On behalf of myself and my family, thank you so much for all of the support that we received from everybody.” Next, Commissioner Tabitha Odell of District 5 addressed the meeting while accepting her plaque, making a point to express gratitude to Chatham County’s staff.

“We have managed to be unified while still addressing the needs of our individual parties and constituents.”

“I am really going to miss the incredible people that work here at the county. They are amazingly competent, extremely efficient, and it has been my sincere pleasure to work with the staff and with this board,” said Odell, who will now focus on her expanding cosmetics business. “We have managed to be unified while still addressing the needs of our individual parties and constituents.” Odell was followed by Commissioner James “Jay” Jones of District 6, who on Dec. 15 was re-elected to continue serving as the Chatham County Democratic Committee chair. While expressing gratitude to his colleagues, Jones noted the limitations he encountered while serving on the board. “When I came into county government, as far as four years ago, I said yeah, I’m going to change everything I can in Savannah,” Jones said. “I learned quickly that when you live in Savannah, you can only change things in Savannah two blocks up.” Finally, Chairman Scott stood before the commission to receive his plaque. After a political career including service in the Georgia House of Representatives and the Georgia State Senate – where he was the first African American elected to the senate from Chatham County – Scott’s public service will not conclude when he hands over the gavel on Jan. 4. Scott was appointed as a member of the Chatham County Hospital Authority on Nov. 6, and he remains an active member of leadership in the Savannah Branch NAACP. Before Scott was given the floor and his plaque at the County Commission’s Dec. 18 meeting, Ellis honored his predecessor with effusive gratitude. “This commission wants to thank you for the leadership that you have shown. And I can honestly say that I’ve never seen you rattled, whatever issue came up,” Ellis said to Scott. “No matter how others may have expressed it, you stayed cool, calm, and collected.” Scott replied to this emotional tribute with his trademark economy of words. “Thank you, and I appreciate the staff putting this together,” Scott said abruptly to laughter and applause before returning to his familiar chairman seat for the remainder of the meeting.