Since the last issue of Connect Savannah came out, eight people were shot in Savannah, one dead.

Ashley Edwards, 25, of the 11000 block of Middleground Road, received non-life threatening injuries when he was shot by a male he had argued with earlier as a bar at Gwinnett and Paulsen streets was closing about 2:48 a.m. Saturday morning. He was transported to Memorial University Medical Center for treatment.

Arkeen Abron, 29, of Port Wentworth, and Showkey Barnes, 37, of the 200 block of Cummings Street, each were transported to Memorial University Medical Center on Friday night after the 7:39 p.m. shooting on the 1200 block of East Seiler Avenue.

Abron was pronounced dead and Barnes was being treated for his injuries.

Jatoya White was found on the 700 block of West 39th Street suffering from gunshot wounds at 12:42 a.m. Friday. She was transported to Memorial University Medical Center for treatment of non-life threatening injuries.

Dion Folston, 17, was found suffering from gunshot wounds on the 1300 block of Southeast 36th Street at 8:20 p.m. Thursday night. He was taken to Memorial University Medical Center for treatment and suffered non-life threatening injuries.

Investigators are looking for a dark colored pickup truck, in which the suspect is believed to have fled the scene.

Ron Smith, 19, was found with a bullet wound by Georgia State Patrol troopers who stopped a speeding car on Interstate 516 about 1:13 a.m. Thursday. Other occupants of the car said he had been shot while walking near Abbot and Chester Streets earlier and they were taking him to a hospital. Downtown Precinct officers had responded to a shots fired call near that intersection about 1 a.m.

Jermariae Heyward, 20, of a Lural Green Court address, was located in a residence on the 200 block of West Henry Street about 12:45 a.m. when Downtown Precinct officers responded to a shooting call.

Rex Hausmann, 31, of the 600 block of Whitaker Street, was found with a bullet wound at Whitaker and Hall streets about 11:12 p.m. Wednesday.

All three were transported to Memorial University Medical Center for treatment of injuries that appeared to be non-life threatening.

Jonie, a female white lab-pit bull mix, was found tending to Chachi, a male scraggly long hair Chihuahua mix, who was suffering from an eye infection. Veterinary staff at the Metro Animal Shelter were not able to save Chachi's ruptured eye, but they performed surgery to patch him up. 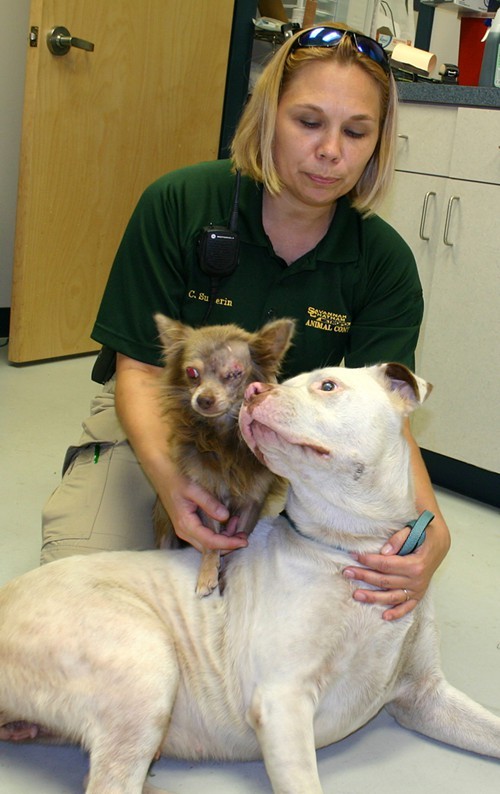 "It's not every day we get to see such devotion between two special dogs like this," said Animal Control Officer Christina Sutherin. "They are both such sweet animals. But the relationship they share just sets them apart. It would be wonderful if we could find a home that could take both of them.

The dogs will be cleared for adoption today. They are up to date on vaccines, are heartworm negative and Chachi has been been neutered.

Candilianne Serrano Zayas, an undergraduate student who conducted her research at the University of Georgia Skidaway Institute of Oceanography, has been rewarded for winning the Outstanding Research Paper in the Savannah State University’s Bridge to Research program.

Zayas will attend an international science conference in February of 2015 sponsored by the Association for the Sciences of Limnology and Oceanography in Granada, Spain. 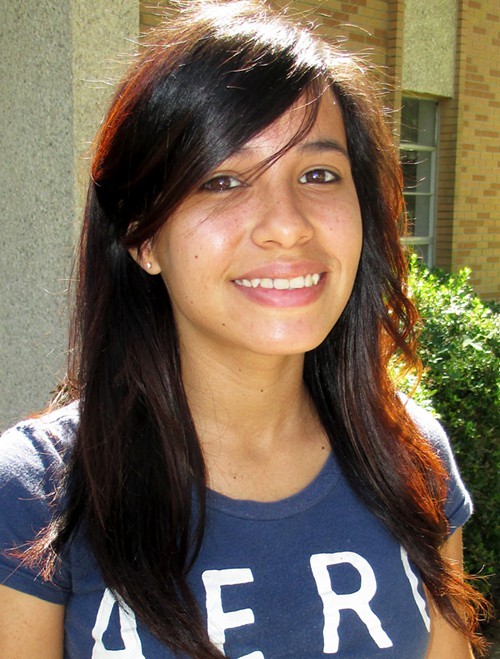 Her research project studied the microbiological community present in dolphins and was chosen from 10 others and tied for first place with Darius Sanford, who worked at Gray’s Reef National Marine Sanctuary and who will also attend the ASLO
meeting.

Zayas is a rising junior and biology major at the Universidad Metropolitana in San Juan, Puerto Rico.

She says she plans to complete her bachelor’s degree in Puerto Rico and then
attend graduate school.

The city of Savannah was recently selected to receive a grant from the National League of Cities (NLC) to help implement local efforts to enroll children and their families in Medicaid and the Children's Health Insurance Program (CHIP).

Led by the mayor's office in partnership with Step Up Savannah, the city's poverty reduction initiative, and other community partners, The Mayor's Campaign for Healthy Children and Families seeks to increase enrollment in Georgia's public health insurance programs - Right from the Start Medicaid (RSM) or PeachCare for Kids (PCK) - by enhancing and expanding enrollment assistance services and outreach activities.

The plan includes utilizing the city's 3-1-1 system as a central clearinghouse to link individuals with enrollment assistance, undertaking a broad social media marketing campaign to increase awareness of enrollment and renewals, and a focus on policy advocacy and systems change.

"As a nation, we've made significant progress on enrolling eligible children in Medicaid and CHIP, but millions of children who qualify for coverage under these programs still need to sign up. Cities are vital partners in outreach and enrollment efforts," said Cindy Mann, deputy administrator at the U.S. Department of Health and Human Services.

The cities were chosen based on the quality and feasibility of business plans that were submitted in the spring and will receive grants of up to $260,000.

Early voting for the July 22 runoff election is open July 14-18 at the following locations:

The City of Savannah recently announced that historical minutes of City Council meetings from 1790 through 1900 are now available on Ancestry.com.

The City Council Minutes collection is for browsing only, as it has not been fully indexed by Ancestry.com. However, the minutes include indexes prepared by the Clerk of Council either in the front of each volume or in an accompanying volume.

Minutes of City Council meetings cover every aspect of City business considered by City Council, including budgets and appropriations, passing of resolutions and ordinances, evolvement of City departments and offices, City employees and appointments, vendors seeking licenses, residents petitioning to make property improvements or for relief from taxes, and much more.

The original hard-copy City Council Minute books — 1790 through present — are maintained in the Clerk of Council’s Office in City Hall and are available for research use by the public. Additionally, microfilm of the volumes covering 1790-1900 is available for researchers at the Bull Street Public Library in the Kaye Kole Genealogy and Local History Room.

Currently the following collections of City records are available to researchers online through Ancestry.com at http://collections.ancestry.com/search/GA/CityofSavannah:

On October 12, 2013, at 11 PM, Timothy Roberts was killed at the intersections of West Victory Drive and Hopkins Street.

"Timothy had just left his mother’s home and was riding his bicycle down the street when he was shot," says a Crimestoppers spokesperson.

A cash reward of potentially up to $2,500 is available anonymously for new information that leads to the arrest of the person(s) responsible for Timothy’s death.

All information provided to CrimeStoppers is anonymous and can be reported 24/7. Tipsters can call CrimeStoppers at 234-2020, send an e-tip though CrimeStoppers website, www.SavannahChathamCrimeStoppers.org, by clicking on the Report Anonymously link, or by text messaging to CRIMES (274637) and inserting the keyword CSTOP2020 before the message content.

TipSubmit, a Mobile App, can also be used and is available for Android and Apple smartphones and tablets through the App Store.

Operation Thunder, a controversial joint operation between the Governor’s Office of Highway Safety and Savannah-Chatham Metropolitan Police begun nine weeks ago, "has produced 1,767 traffic citations and 44 other arrests so far," says a spokesman.

The numbers were released Monday by the GOHS "as the operation moved into its second stage in the Savannah area," the spokesman says.

So far, Operation Thunder issued 256 citations for seat belt violations, 187 for child seat violations, 630 for speeding, one reckless driving, 27 for driving without insurance, 78 for suspended licenses, 510 for “other violations.”

Perhaps interestingly, there were only 76 DUI arrests.

The operation, invited to the Metro area by Police Chief Julie Tolbert at the suggestion of GOHS Director Harris Blackwood, "focuses on areas where fatal accidents had occurred and targets aggressive drivers and those drinking and driving."

It has also garnered scrutiny for its implied threat of forced blood withdrawals for DUI suspects under the so-called "No Refusal" option.

"The Savannah Thunder operation has proven successful thus far,” said Director Blackwood. “The cooperation of the Metro Police, the Georgia State Patrol and our law enforcement partners from around the state is the key to this success."

Metro Police Chief Julie Tolbert said "We are noticing fewer impaired drivers and many more designated drivers and we have been able to take dangerous subjects off our streets."

Savannah-Chatham Metropolitan Police are investigating the death of a 4-year-old boy who was pulled from an apartment pool in west Chatham County on July 4.

Frazier King was noticed by his mother and others about 2:10 p.m. in the pool on Timber Crest Court. He was transported to Memorial University Medical Center, where he was then declared dead.

Police say the investigation is continuing.

The Georgia Department of Natural Resources is investigating the death of a Savannah man after his boat overturned near Williamson Island in the Wassau Sound on July 6.

A man in his early 50s was declared dead at the scene when U.S. Coast Guard officers reached the small, open bowed boat. His wife was transported to Memorial University Medical Center for treatment of undetermined injuries.

"Names are being withheld until the family is notified," says a Memorial spokesperson.