AT ANY given time over the years, one band is usually seen by the music world as chief standard-bearer of the Athens sound.

Despite the fact that most of them actually live outside the Classic City these days, the main flag-waver today would almost certainly be Futurebirds.

The friendly ensemble performs the rare feat of blending rock, country, and psychedelia into a seamlessly satisfying package—along with an active and playfully fun social media presence that has helped gain a devoted following outside Georgia.

They recently followed up their influential 2013 full-length album Baba Yaga with a special EP, Baba Java, tied into a new coffee blend by Jittery Joe’s roasters in Athens, complete with a drawling cover of R.E.M.’s “(Don’t Go Back To) Rockville.”

Savannah crowds saw them just this past September headlining Revival Fest, their sweeping and nostalgic Southern-fried echoes a perfect fit for the old stones of the Georgia Railroad Museum.

You get the opportunity to see Futurebirds again this Friday night in an early Savannah Stopover concert in another unique venue, Southbound Brewery.

Just as with Jittery Joe’s, the band will help promote a special Southbound sarsaparilla-flavored ale named “Johnny Brewtah” —the winning entry in a Facebook contest and of course named after their popular song “Johnny Utah.” 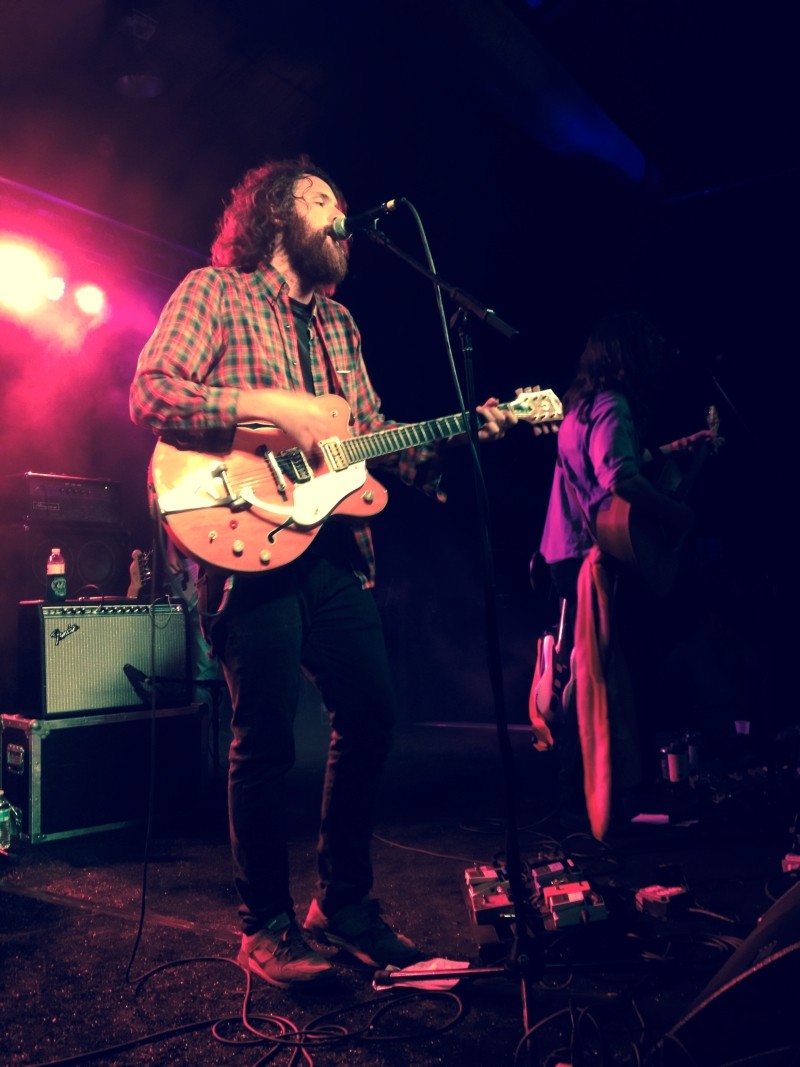 We chatted with singer/guitarist/songwriter Carter King last week as he was walking down the street before soundcheck for a gig in Pittsburgh.

1. The show y’all did here at Revival Fest was one of the best shows this town has seen in a long time. What did you think?

Carter King: That was really one of those dream festivals where everyone there is your friend or in a band you really love. It was small enough that it wasn't overcrowded with people. Everything was nice and tight, in a really beautiful venue. It was pretty spot-on all around. We all had a really great time.

2. By this point you've played all sizes of crowds, from Bonnaroo to little college town dives. What's the ideal Futurebirds venue?

CK: All sizes have their pros and cons. We enjoy a small or mid-sized club that's packed with energy and people who are excited to be there. But obviously playing in front of huge crowds must mean we're doing pretty good (laughs). I guess that's a cop-out answer, isn't it? But we love 'em all.

3. At this year's AthFest, I was struck by the many different types of fans lined up around the block to get into your show at the 40 Watt: hipsters to frat bros to everyone in between. Is that crowd diversity something y'all particularly pride or work toward?

Not too long ago we played a double-header, two shows on a Saturday. We played like on a college campus at Hampden-Sydney, and when we got done with that we raced to Richmond and played some kind of psych fest that night, this total psychedelic festival. We were tired as shit after all that, but we all agreed it was pretty awesome to be able to do that.

4. The flipside of Athens is that musicians can get a little too comfortable there because it’s so supportive and everyone knows everyone else. You guys have clearly made the successful jump outward.

CK: Yeah, as we've said many times, Athens is the perfect baby band incubator. You have this totally supportive community with club owners giving smaller bands a chance. You can push yourself outside your comfort zone. And an Athens crowd is just cooler in general. It's a cooler town all around than most places.

5. Your 2013 album Baba Yaga is an instant classic, a staple of dorm rooms and house parties and frat parties all over the Southeast. Are you guys ever like, 'Holy crap, there's no way our next record can possibly be that good?'

CK: (Laughs) Not really. I mean, we worry about everything all the time, so you've got to throw that in the mix. We've got a great new album we're sitting on, to be released next year. It's a lot different from Baba Yaga. It's definitely not just more of the same. I mean, it's the same group of guys writing and playing. But the production's a little different. It's a little tighter. More sparse. Not as lush, I guess you'd say.

6. Wait, so you're saying the next album is recorded and good to go?

CK: Yeah, other than a few tweaks it's basically in the can. We're going to call it Hotel Parties. It's an on-the-road album for sure (laughs).

7. The reviewers all mention your "reverb-drenched" sound, but to my ears Dennis Love's pedal steel is at least as emblematic of Futurebirds.

CK: Well, we're all huge fans of pedal steel, and I guess you could describe it as sort of the groove of the band. Of course I like to think of our sound as the sum of all parts. But Dennis is definitely one of the most fantastic pedal steel players in the country and we're real happy to be playing with him.

8. When you're not writing songs, what do you guys listen to for fun on the road?

CK: Oh man, riding around in the van it's just all over the place, between the six of us and all the places we come from. A lot of old '70s Americana, Neil Young, Grateful Dead, Rolling Stones. Maybe some Galaxie 500.

We’ll even put on the new Taylor Swift record, or whatever’s new. We’re all over the place.

9. Your touring schedule this year has been brutal. Are y’all on autopilot by now?

CK: Not really. The thing is everywhere you go it's still clear that the last step was a little higher than the one before. They might be small steps but you're still climbing. We see more people in every town coming out to see us, and that's great. It's definitely not getting stale for us.

We’re kind of on the last leg for a little while. I’m wandering around the streets of south Pittsburgh right now, before this polar storm sets in. We’re finishing out this weekend up here and then we’ll come down to Savannah, then Charleston. Another short little run to New York City and then we play New Year’s Eve in Atlanta.

10. Is there a noticeable difference between Southern crowds and our friends north of the Mason-Dixon line?

CK: People might be a little less drunk up North, I'm not sure (laughs). People still really dig it everywhere we go. You'd be surprised.

I feel like the Southeast is one of the biggest transplant parts of America—everywhere we go someone tells us they just moved there from Georgia or North Carolina. Maybe it just seems that way since we’re all from Georgia. They’ll always tell us they’re happy we’re there. And we’re definitely happy to be there with them.