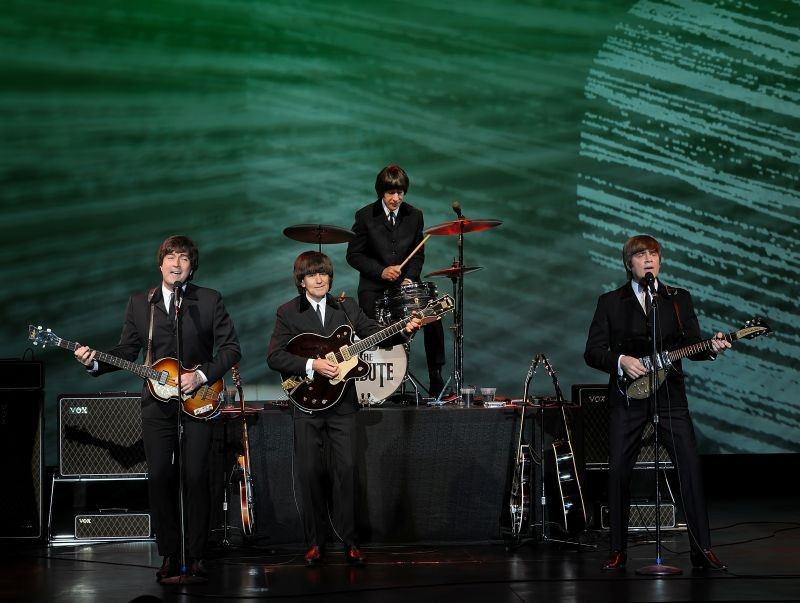 Heralded by Rolling Stone as the “Best Beatles Tribute on Earth,” 1964: The Tribute returns to Savannah this weekend to recreate an authentic shot of British Invasion.

Performing only the material that existed during the Beatles’ time touring America, the Ohio-based group has considered every possible detail to transport audiences to the past. From the bangs to the timbre of their laughs to the tone of their amplifiers, 1964 presents an authentic and fun-filled experience for Beatles fans of all ages.

We caught up with John—er, Mark Benson—to learn more about the group’s origins, artistic devotion, and the eternal magic of the best band in the world.

What prompted you to begin a Beatles tribute band?

It’s my fault, really! Being in original groups, we’d all known each other from being in the same town, growing up in the music industry. We’d all seen each other’s bands. We wanted to progress from Top 40, put together a studio, have fun, so you don’t lose touch with performing. We were never thinking it would be full time, or intending it to be. That was 32 years ago in 1984!

Two years from then, we hit huge in the college market in America and Canada and set records. We’d go to these showcases, play for 20 minutes in different regions at different conventions. We were blown away. We thought, ‘They’re going to want to hear current music.’ Then this thing just took off, and for a while, we did nothing but colleges across America. To this day, we’re doing about 80 to 90 shows a year.

How do you capture the full experience of seeing the band in their day?

Those first years for us were jam-packed. We wanted people to see what it was like to do a Beatles concert: matching suits, similar haircuts, amplifiers, drums, guitars, the banter they do back and forth. We wanted to show them as good as they could be. If you got a ticket to see the Beatles, this is what you would have seen. This is a Beatles concert.

When you got started, how did you decide what material you’d play? Were you focusing on a certain era, skimming the hits...?

We play everything up to Revolver. This was another thing we were aghast by: You expect people who grew up in that time period to get into it. We thought we'd be playing parties, class reunions, some nightclubs, we were thinking maybe once a month, two months. We quickly found out that there's no demographic not included in Beatles fans. 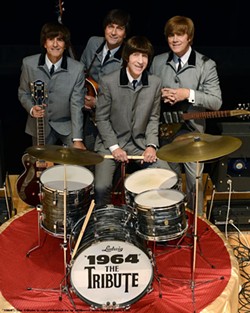 Recently, I had a grandad and grandson sitting front row, and every song, the kid would look up at his grandpa. We talked after—they’d just finished playing the Beatles Rock Band game beore the show. This is wild, because when you do something with your grandkid, you do something they like. They were both into this.

It really does have this positive, unifying effect on the audience: they sing, smile, laugh, scream like crazy, and nobody really cares! It’s like therapy.

Did you begin with studying archival footage?

Well, in ‘84, there wasn’t a lot of really high-quality stuff. Now, you’ve got great DVDs and videos. Then, you had to get a copy of a copy of a copy. The stuff that’s available now was harder to get back then. We’d watch the movies, see how they talk to each other, watch film clips of them live onstage, how what they say is different than what Americans say.

You adjust what you do so people out in the audience have more of a sense that, ‘Wow, that is just like what I remember’ for people who saw the Beatles, and for those who never did, too.

They were very cheeky, always joking around, great sense of humor. We make sure people come to the show, have a laugh, and leave happy.

Were you Beatles-obsessed before this?

I’ve been a Beatles fan ever since they were the Beatles. I saw their Ed Sullivan Show appearance—that was a school night, and I had to be in bed at 8:30, and Ed Sullivan was on from 8 to 9. I saw the first half and went to bed, and could still hear the TV downstairs—‘Oh, Dad, you’re killing me!’

So after doing this for 32 years, do you have a favorite song to play? Do you go through phases of favorites?

It’s like trying to pick your favorite flower: There are so many beautiful flowers. It’s the same. You look at these Beatles records, and most groups who have an album, there are maybe one, two singles on it. All the Beatles records could be in the top ten. I couldn’t pick a favorite song or album. The Beatles in ’65 were so good; Rubber Soul is killer.

There are certain songs you have to do every night—‘She Loves You,’ ‘Twist and Shout,’ ‘I Wanna Hold Your Hand.’ About half a dozen or eight songs there, you can intermingle. I think within the time period we do, one of my favorites is ‘Yes It Is.’ It’s a B-side and lesser-known, but it’s very beautiful.

It’s really an ongoing process, because anyone in any kind of creative endeavor—be they a dancer, artist, musician—your natural tendency is to progress in some direction. Our challenge is to learn something one way and never change it. That’s hard. The live versions [of songs] were different than recorded versions, because [the Beatles] were already progressing. So you wonder, do you play the versions everyone in the audience is most familiar with, or pull out a rare, live version you think is really cool? We’ve adopted the mindset of ‘Let’s play it like the record, but put the live energy into it.’

We video and audiotape frequently to make sure we’re still on mark. And it’s tough. You have to pay attention and be thoughtful.

What have you learned about John from embodying him?

John was really unedited and was, generally speaking, a very loving person, and most of his writing reflects that. I think that’s something that, subliminally, people relate to about the Beatles. All their songs are positive. Even ‘I’m A Loser’—it’s up-tempo, it’s happy. There’s something about the chemistry of those guys that pulls you in on another level that music and words can’t.

John was witty, and he was unedited. He got them in trouble a couple times with things he said or were misconstrued. He didn’t have social awareness of ‘I better not say that,’ but 99 percent of the time, what he was saying was something he actually felt strongly about, even if it offended people. That’s what people respected about John, even though something the other band members took some heat for it, like the ‘Bigger than Christ moment.’*

*In a 1966 interview with the London Evening Standard, Lennon was quoted as saying the Beatles were ‘More popular than Jesus,’ leading to international controversy.

What can Savannah audiences expect from 1964?