When it came to designing the menu, the Pardeshi brothers handed the reins to Executive Chef Michael Pfab

AT FIRST, the airport exit off I-95 may seem like an odd place to build a high-end, multi-million dollar restaurant and nightclub.

But mull it over with a plate of steamed mussels and a perfectly-crafted old-fashioned and it makes perfect sense. Local “restaurantrepreneur” Sandi Pardeshi chose to put his vision in Pooler for some of the same reasons growing families decamp here from the city proper: Less red tape, easy parking and plenty of elbow room.

At 10,000 square feet, 201 Seafood Restaurant & Tapas Lounge is a grand, gargantuan testament to good food and great times in a corner of Chatham with a conspicuous dearth of both.

Bisected down the middle with separate entrances, one side serves upscale American fare with a modern ambience while the other offers DJ-driven, dance-fueled nights, both exciting options for nearby residents as well as Gulfstream and JCB expense card holders and overnight hotel dwellers eager to entertain clients somewhere more interesting than Ruby Tuesday.

Diners are met with a dazzling display of fresh seafood upon entry, lobster tails, oysters, whole fish and octopus tentacles glimmering like pirate booty in a treasure chest.

Along the wall are wine pairings presented as works of art, a background of rich wood aglow under amber light fixtures.

“We wanted to showcase our local seafood and environment with a modern twist,” says Pardeshi, pointing out Savannah gray brick and driftwood installations juxtaposed with shimmering water features and sleek leather booths.

Pardeshi conceived the venture with help from his brother, Raj Patel, with whom he has shared enormous success next door at Sam Snead’s, the posh sports bar that has served as Pooler’s main hotspot for the last eight years. The Mumbai-born brothers also own Taste of India on Savannah’s south side and saw an opportunity to capture the untapped market of nearby industry executives, West Chatham foodies and commuters from other counties.

“There was no real fine dining out here, really no place for seafood and certainly nowhere to go for a VIP experience,” says Pardeshi, a former SCAD design student who created the luxe interiors.

When it came to designing the menu, the brothers handed the reins to Executive Chef Michael Pfab, a family friend and former chef de cuisine at Vic’s on the River and Melt in New York. Also a veteran of corporate resorts and hotel kitchens, Chef Pfab knew that a key in 201’s success would be serving haute cuisine in comfort food portions. Some restaurants with a price point of $18-$35 for an entrée may try to rely on style over substance, but he says both are top priority under his watch.

“I’m used to cooking for refined palates with big appetites,” laughs the Johnson & Wales-trained culinarian. “I do not want anyone to leave here hungry.”

Indeed, each dish that comes from his kitchen is large and plated beautifully, from the grilled octopus appetizer with white beans arranged in a star ($14) to the broiled whole fish brought to the table on a wooden tray, styled grandly on a bed of fragrant basmati rice and julienned vegetables (market price).

Each dinner menu item seems a signature creation. The truffle-scented lobster mac-and-cheese ($28) has already become a talked-up stand-out on 201’s Yelp page, and the bouillabaisse—brimming with scallops, clams and jaw-dropping 3-inch mussels—arrives in a bath of tangy tomato broth ($30). Five fat scallops, seared and glistening with citrus vanilla butter ($32), may be the best iteration of its kind within two hundred miles.

Where there’s surf, there’s turf, and Chef Pfab does a spectacular turn for the carnivores. (Don’t worry, non-meat eaters: he has you covered with massive salads, roasted cauliflower, parmesan risotto and a host of other tempting vegetarian options.) 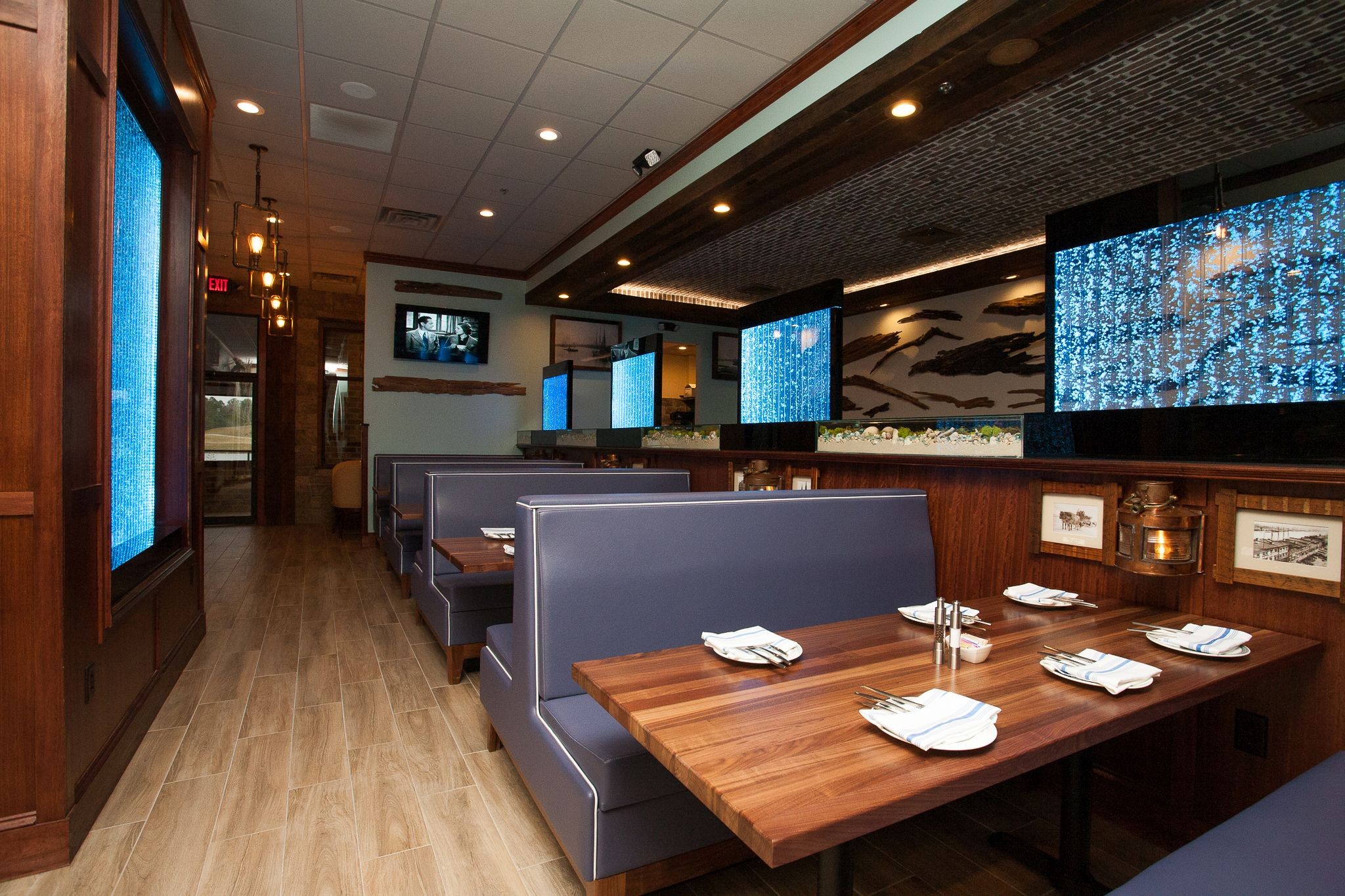 A 12-ounce, bone-in veal strip steak ($38) tops the “Fur and Feather” section of the menu, followed by an herbed chicken breast ($23), a hunky beef tenderloin ($38) and a brisket-and-short rib burger topped with house-cured bacon ($15).

Even the rustic dishes get Chef Pfab’s flavorful touch.

The curated wine list holds up to the robust victuals (you’re gonna a need a Burgundy with some teeth to go with that veal steak) and there’s an insane selection of rare whiskeys and single malt scotches.

The craft cocktails stand on their own as reason to avoid Tanger Outlet traffic or to drop in as a buffer on your way home from a long trip. Goza Blanco tequila and apricot-infused agave syrup gives the house margarita a lip-smacking zest, and the pisco sour is the real deal with egg white and Peychaud’s Bitters.

After dessert (try the Apple Brown Betty with figs and pecans served with a scoop of salted caramel ice cream in its own cast iron pot, $8) and post-dinner drinks (Smoking Hot Toddy, anyone?), it’s time to burn it off on the liquid lava dance floor.

The restaurant’s hearty vigor gives way to the colorful, kinetic energy of the lounge, all fun and flash from the minute you step on the foyer’s LED-lit square. A three-dimensional mural of Savannah and its musicians by Tybee artist Denise Elliot-Vernon practically thrums on its own, though it might be the surround sound system designed by Michael Gaster.

Gaster also installed several half-moon trusses with spinning pixels to light up the atmosphere, elevated with Vegas-style touches like a 50-foot cutout bar and a life-size gingko tree in the center of the room. A rotating team of DJs keeps the energy up, along with a late-night snack bar serving up charcuterie, cheese and tapas. Ballers can find bottle service in the VIP lounge, a self-contained sanctuary with its own servers, satellite TV and sound system.

Pardeshi and Patel pushed to open the nightclub in time for the holidays, and the 6,000-foot psychedelic hotspot is bound to be packed for New Year’s Eve. A $25 cover gets revelers in the door ($75 for the VIP lounge), and $5 drink specials ought to make midnight come fast and fancy.

“We want to bring in the new year with a party people talk about for months after,” grins Pardeshi. “We want 201 to be the place to be in 2017.”

With its fine fare, destination dance floor and easy access, the mammoth compound has already made a big impression—and Pooler may never be the same.