“Swinging Into the Season” with opening night and kick-off reception

Featuring the Elite Party Band and selected Artists of Season 10

Join SVF for opening night with an exciting swing concert that introduces Savannah to the artists of the 10th Anniversary Season! After this lively concert, guests are invited to a special kick-off reception.

With a long tradition of storytelling in its decade of events, SVF continues its tradition of a night that celebrates the art of song. From German Lied to American Songbook, ten selected 2022 SVF artists will transport you to another world!

Co-founder and president of the Savannah VOICE Festival Sherrill Milnes offers his expertise to a new generation of singers in a master class setting.

libretto and music by Gian-Carlo Menotti

Executive Director Chad Sonka and Conductor Andrew Bisantz join forces again for this intimate and eerie American one-act opera. The Telfair Rotunda is the perfect setting for this boutique opera-noire, where a medium falls victim to her own fraudulent voices. This is a must see!

Join us for this FREE Master Class with Artistic Director of the Milnes VOICE Programs Jorge Parodi. Parodi has conducted and coached all over the globe and you don’t want to miss this opportunity to see him work with the Season 10 VOICE artists as he shares his expertise. This season Maestro Parodi conducts Faust as part of Savannah Opera at the Festival.

libretto and music by Michael Ching

Two ghost stories that were written to be performed together, will be seen for the first time on the same stage in the city for which they were written. Now, see them as they were meant to be, tragedy and comedy, about Savannah’s history; past and present. Jessica Best and Maria Zouves will reprise the title roles they originated. Alice Ryley is based on a true, but tragic story of the immigrants’ experience in America’s young colonies. Even Ogelthorpe himself could not save the young Irish indentured servant as she finds challenges, love and loss in 18th century Savannah. Set in the Davenport House, the ghost of Anna Hunter comes back to modern times to tell her story in this lighthearted story of mid-50’s Savannah. Miss Anna, along with her friends, inspired a city to save itself from destruction through her wit, energy and determination.

Let SVF start your day off with some heavenly music! Join the Festival on Saturday mornings for a “cuppa,” a pastry and a song (or two) at the beautiful Davenport Museum Gardens and the new Kennedy Pharmacy.

libretto and music by Michael Ching

This event is free and open to the public with proper proof of vaccination.

Since the first season, the Festival has celebrated songs of Inspiration from Sacred texts and comforting themes. From oratorio to the uplifting tunes, this is a shining star of the Festival offerings and not to be missed!

Watch Puccini’s dramatic masterpiece filmed on location with Sherrill Milnes, Placido Domingo and Raina Kabavianka. This is true opera movie making with director’s comments that are live, and Milnes will give you insight and exciting stories about the filming of this classic.

Return to Brigadoon: A Celebration of the Lerner & Loewe classic

The timeless fairy tale of the mystical place is reimagined with its most memorable music and romantic moments. Journey to the 100-year moment when the moors open again for you to “Come to the Square” and fall in love with Fiona and Tommy all over again… and again!

Soprano Maria Zouves, Co-founder and president of the Savannah VOICE Festival has directed, taught, and produced events all around the world, and now brings that experience to the singers of Season 10 in this master class.

Be My Love : A Mario Lanza Tribute

This iconic pop culture tenor hit the Hollywood Bowl and movie scene with the power of Bocelli and legendary stature of Pavarotti. But this life was as dramatic a tale off the stage as well as on. Get to know his story through the eyes of our own Peter Lake as he offers Lanza’s history and greatest hits.

Return to Brigadoon: A Celebration of the Lerner & Loewe classic

Free Admission Legendary bass-baritone James Morris is world famous for his performances in opera, concert, recital, and recording. Join us for this special guest master class as Mr. Morris works with artists from SVF’s 10th Season.

The Festival’s theme peaks with this classic tale of a pact with the devil, only the way that grand opera can tell it. SVF has put together an extraordinary cast in this special Savannah Opera production with Goethe’s story of Marguerite and Faust. This legendary tale is told through glorious music that will fill you with emotion and lift you to another realm.

General Seating (includes food & beverage) Let us start your day off with some heavenly music! Join us on Saturday mornings for a “cuppa,” a pastry and a song (or two) at the beautiful Davenport Museum Gardens and the new Kennedy Pharmacy.

There is no better way to close out Season 10 than with one of the most beloved American singers of a generation! The 2022 Milnes VOICE Awardee Frederica von Stade takes the stage with stories and song, with SVF favorite Dan Gettinger at the piano. Afterwards, join us for a special reception where we present “Flicka” with the 2022 VOICE Award and pay tribute to the 10 years of great music with SVF. IT’S ABOVE AND BEYOND! 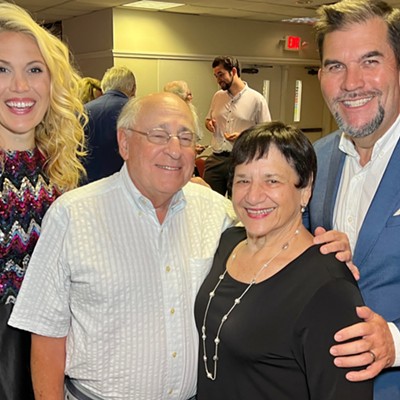 More by Special to Connect Savannah