FilmNation Entertainment
Simon Rex is garnering buzz for his role in ‘Red Rocket.’ Rex will receive the Spotlight Award on Oct. 26, at the film’s screening.

Because of the pandemic, returning to the cinema feels more daring, risky and revolutionary than it has in years past. And, now that audiences know how quickly our lives can alter, a great movie is a treat that fans cherish even more.

In its 24th year, the SCAD Savannah Film Festival has created an in-person and virtual event filled with such treats, screening 157 films, including 45 narrative features and 15 documentary features. Remarkably, 63 of the films at the festival are directed by women.

The following are the most anticipated titles and award-winning special guests coming to town.

This black-and-white film, set in 1969 Northern Ireland, is Branagh’s autobiographical take on how his family survived and escaped The Troubles, a violent series of clashes between Protestants and Catholics within their neighborhood. While his family copes with violence and the possibility of leaving the nation, young Buddy (Jude Hill) is just trying to play with his friends, attend school, go to the movies and cope with his growing feelings for girls.

Jamie Dornan and Caitriona Balfe play Buddy’s parents, who are struggling with tax bills and the violent changes in their neighborhood. Buddy’s grandparents are played by the excellent Judi Dench and Ciaran Hinds. The film promises to be a sentimental, moving crowd pleaser. It is a favorite for the Best Picture Oscar among prognosticators.

Branagh, who has previously directed and starred in such films as “Henry V” and “Murder on the Orient Express,” among many others, will receive the festival’s Lifetime Achievement in Acting and Directing Award Oct. 23 at 7 p.m. as part of the gala screening for “Belfast,” which already won the People’s Choice Award at the Toronto International Film Festival.

The rise of Venus and Serena Williams in the world of professional tennis may have surprised some people, but not their father Richard, who is the focus of this biopic directed by Reinaldo Marcus Green and starring Will Smith and Aunjanue Ellis.

Richard is a strict, unconventional parent, taking his family from Compton, Calif., to the world stage on sheer faith that his plan for raising world-class athletes would work. And it did, although there were clashes with coaches and other struggles along the way.

Smith has already received wide acclaim for his work, and awards attention is expected. Ellis, who recently starred in the series “When They See Us” and “Lovecraft Country,” will receive an Oustanding Achievement in Cinema Award after the Trustees Theater screening of the film Oct. 30 at 7 p.m.

Sean Baker, the director of “Tangerine” and “The Florida Project,” shines a light in his films among forgotten communities, presenting stories of poverty and struggle with wit and spirit. In his latest film, Baker focuses on Mikey, an adult film star played by Simon Rex. Mikey returns to his Texas hometown broke and destitute, promising his wife and mother that he will make amends with them. But, when he meets a donut shop cashier named Strawberry, his plans go awry.

Rex will receive the Spotlight Award after the screening of “Red Rocket” at Lucas Theatre for the Arts Oct. 26 at 9:30 p.m.

Pablo Larrain’s examination of the struggles of Princess Diana over a Christmas weekend with the royal family, during which the future of her marriage is a matter of debate, has already gained significant praise and awards buzz for star Kristen Stewart. Her embodiment of the role is apparently uncanny, though the film is not a strict biopic. Like Larrain’s “Jackie,” it explores the central figure at a decisive moment.

The Southeast premiere will occur Oct. 29 at 6 p.m.

Director-producer Todd Haynes, whose narrative films have included “Velvet Goldmine,” “Carol” and “Far from Heaven,” will participate in a Q&A after the screening of this documentary about the revolutionary rock band, which emerged from Andy Warhol’s New York art scene. The film includes never-before-seen performances by the band. The screening takes place Oct. 24 at 11 a.m. at Trustees Theater.

Olivia Colman stars in this adaptation of an Elena Ferrante novel as Leda, a woman whose seaside vacation is disturbed when she witnesses the struggles of a young mother (Dakota Johnson) and daughter there. Leda begins to reflect back on her own choices as a young mother, leading her to become involved with the young parent.

Writer-director Maggie Gyllenhaal will be presented with the Rising Star Director Award after this screening Oct. 28 at 7 p.m.

Colman also stars alongside Odessa Young and Josh O’Connor in this 1920s period drama from director Eva Husson. A housemaid, played by Young, carries on a secret affair on Mother’s Day with a wealthy man engaged to someone else.

Young will receive the Discovery Award after the screening Oct. 25 at 6 p.m. at Lucas Theatre for the Arts.

Oscar-nominated actress Ruth Negga and Tessa Thompson star in this Netflix film, adapted from a 1929 novel and directed by noted actress Rebecca Hall. “Passing” is about two Black women who can “pass” as white, but they choose different paths during the rise of the Harlem Renaissance. As they reunite, they face new difficulties.

Negga is expected to attend this Trustees Theater screening to receive the Spotlight Award.

Benedict Cumberbatch, Kirsten Dunst, Jesse Plemons and Kodi Smit-McPhee star in this period drama from Oscar nominee Jane Campion, which focuses on a rancher taunting the widow who marries his brother in 1925 Montana.

Smit-McPhee will receive the Discovery Award after the screening.

Clifton Collins Jr. will receive a Distinguished Performance Award following this Lucas Theatre for the Arts screening, where he stars as an aging, injured rider who hopes to win one last title. A new jockey arrives, claiming to be his son and in need of guidance.

Brody will receive the Vanguard Award and attend a Q&A at Trustees Theater afterward.

In this Southeast premiere screening at Trustees Theater, Penelope Cruz reunites with director Pedro Almodovar for this story of a young mother (Milena Smit) and older mother who give birth in the same hospital on the same day.

The centerpiece gala screening of the festival will be the new film from director Mike Mills (“Beginners”), which stars Oscar winner Joaquin Phoenix as a radio journalist whose young nephew is suddenly left in his care.

Mills will receive the Auteur Award after the Trustees Theater screening.

Other worthwhile films set to play the festival, already in wide release or available streaming, are “Flag Day,” “Summer of Soul,” “Dune,” “The Last Duel,” “Respect,” “Luca” and “The Millers vs. The Machines.” Also, classic spooky titles are scheduled throughout the week in anticipation of Halloween, including “Halloween,” “Hocus Pocus,” “Psycho” and “The Shining.” 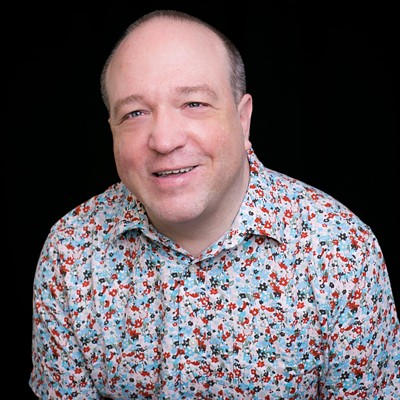 As a child growing up in the South with cerebral palsy, Benji Carr developed an eye for the bizarre and quirky, which provided all of the stories he told his friends and family with a bit of flavor. Working as a journalist, storyteller and playwright, his work – whether the stories be personal tales of struggle...
Read More about Benjamin Carr