'Miss Mitchell' and other vintage WWII warbirds are on hand at the Savannah airport to offer tours and rides all this weekend.


SEVENTY-FIVE years ago this month, one of the most courageous acts in military history occurred: The fabled "Doolittle Raid."

Sixteen B-25 bombers, designed for land-based operations, took off from the deck of the U.S. Navy aircraft carrier U.S.S. Hornet. Photo by Jim Morekis
Pilot In Command Matt Quy, U.S. Air Force and Commemorative Air Force, with 'Miss Mitchell.' The nose art is by the original artist.
Twin engines straining and lightened of all extraneous weight, the bombers took off on a one-way mission to bomb military and industrial targets in the Japanese homeland, thousands of miles from the nearest U.S. land base.

The crews, led by legendary Lt. Col. Jimmy Doolittle — later a General — knew that taking off from the carrier's pitching deck wasn't even the hardest part of the mission: They would have to crash-land in China after the bombing raid, and hope for rescue on the ground.

The damage caused to Tokyo and surrounding targets wasn't extensive. But the heroism of the Doolittle Raiders was the first time since the Pearl Harbor attack that U.S. forces went on the offensive against the Japanese Empire, causing consternation and near-panic in the Japanese high command.

I got a once-in-a-lifetime opportunity to fly in a WWII-era B-25 this week: "Miss Mitchell" is on hand at the Savannah airport to offer tours and rides all this weekend.

It is a powerful and raw experience, flying in a vintage craft like this. There are no frills, as the entire purpose of the plane is military.

The only decoration is the opulent and colorful nose art, the eponymous pin-up of Miss Mitchell herself.

There is no cabin pressurization, no air conditioning. You have to wear a headset not only to communicate with the rest of the crew, but to protect your hearing.

"The B-25 was known as the loudest airplane you could fly in World War II," co-pilot Dean Butler tells us in a pre-flight briefing. "Some crews experienced hearing loss after the war, just from flying hours at a time in these planes. So you want to make sure you keep that headset on!"

We are given spiffy, slip-on flight suits so we can keep any stray oil or dirt off our civilian clothes. The flight suits come in handy when we take turns sliding under the cockpit to get to the bombardier's position in the plexiglass nose of the B-25. 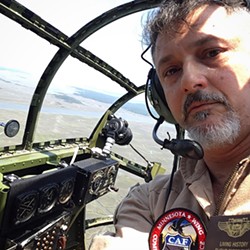 Selfie of the author in the nose of the B-25, where the bombardier sat.
Almost like something on a children's playground, you get there by laying on your back, grabbing metal rails, and pulling yourself forward on the smooth stainless steel.

It's fun — but I'm glad I'm not claustrophobic.

Despite the lack of creature comforts — or because of that lack — it is as close as we can come to experiencing what these heroic young men, many not even out of their teens, experienced 75 years ago.

Butler says, "You have to remember, most of the young men who fought in World War II grew up in the Depression. They were often malnourished. These seats are so small because the men were small. Six feet was tall back then. Six foot two, you were a giant."

Restored, owned, and operated by the Commemorative Air Force's Minnesota Wing, this particular B-25 was actually used as a trainer. The original "Miss Mitchell" was demolished at war's end, a sad fate for a distinguished veteran of the Mediterranean campaign with over 120 bombing missions.

"Because she was demolished, we were actually able to take over her tail number and transfer it to our Miss Mitchell," Butler says.

And this Miss Mitchell is indeed an accurate replica, down to the nose art — repainted by the original artist, now passed away like so many veterans of that war.

Miss Mitchell was so successful — not losing a single crew member to death or serious injury — that she gained an almost religious aura in the U.S. Army Air Force.

Airmen tending to be a bit superstitious, in the manner of baseball players, they would specifically request assignment on Miss Mitchell.

Dean Butler trades pilot duties back and forth with Matt Quy, who will be our Pilot In Command today.

Exuding the typical genial confidence of pilots the world over, Quy is a young U.S. Air Force veteran who served as a B-52 pilot with the Eighth Air Force, based in Barksdale, La.

Today he trades in the eight jet engines of the big B-52 for the two radial piston engines and cramped quarters of this legendary WWII warbird — and he seems happy as can be about it.

In fact, his name patch on his flight suit says just that: "Happy."

"The B-25 was the most versatile bomber of World War II, in any air force," explains Quy before we board the Miss Mitchell.

"It was the perfect choice for the Doolittle Raid off of the carrier deck, with these powerful engines in a comparatively small package."

Plugged into the plane's intercom system, we can hear the conversation between the pilots and air traffic control. The tone from the tower is respectful; they're aware of the unique nature of this visitor.

We'll be able to walk around the plane soon after takeoff, but until then we sit belted in. I am seated behind the co-pilot, in the flight engineer's seat.

Across from me is Jim Berry, with the Mighty Eighth Air Force Museum. We'll take turns going up front into the bombardier's seat, with its excellent view from the clear plexiglass nose.

As we taxi to our takeoff position, I think, these engines aren't that loud. I take my headset off to hear them.

Then, Quy spools up the engines for takeoff, and I think, that's what they were talking about. The entire plane seems to turn into a subwoofer as Quy throttles them up.

I put the headset back on.

We fly at no more than 3,000 feet, first ranging down the Savannah River and out to shore, to nibble at Hilton Head island. We turn south and flash along Tybee.

This is my turn up front in the nose. The once top-secret Norden Bombsight is right in front of me as I shoot video and photos, houses and buildings clearly identifiable below, along with individual ocean waves and moving cars. I get a sense of what it might have been like over Japan 75 years ago.

Then Quy circles us back to town, and I hear him say over the intercom, "Let's see about a 360 over downtown."

We head straight for downtown Savannah; I can pick out individual buildings and landmarks immediately. We continue past the Talmadge Bridge, seeing the full sprawl of the Georgia Ports Authority docks, packed with shipping containers on massive parking lots, awaiting distribution.

I think to myself, in 1942 this would have been a juicy target.

We turn north and fly completely around Hutchinson Island for another pass over downtown, before returning to our landing approach back at the old Savannah airport. 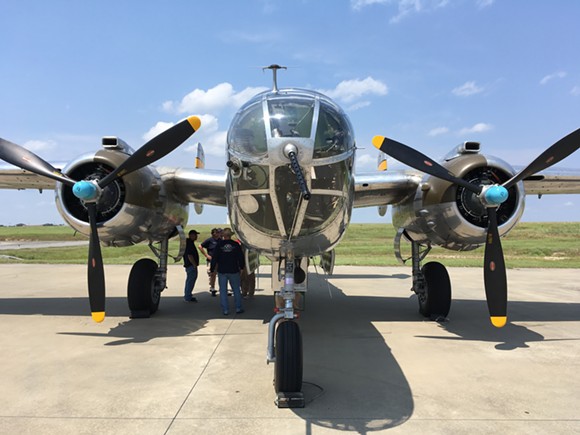 Photo by Jim Morekis
The nose view of Miss Mitchell.
Though Quy complains about his landing — "That was a little wonky" — that's just the perfectionism talking. It is as light a landing as I've experienced in any airplane, and if the rest of the Air Force boasts pilots like Matt Quy, the country is in good hands indeed.

It's expensive to maintain and fly these vintage warbirds. There are no factories that make replacement parts for 75 year old aircraft. A flight on the Miss Mitchell isn't a ride at Six Flags.

Then again, people don't bat an eye at paying hundreds of dollars to, say, United Airlines, for the "privilege" of waiting in a security line for an hour and then being packed on board with 200 other people, hoping you don't get dragged off by your feet because the flight's overbooked.

No, this is a literal once in a lifetime opportunity to experience what your grandfather or great-grandfather experienced when he was barely old enough to drink a beer. Instead of enjoying the typical teenager's life, they were called on to save the world from tyranny, learning to fly about the same time they learned to drive.

There is great value in that, far beyond what can be measured in dollars.

The Miss Mitchell is at the SheltAir facility, 100 Eddie Jungemann Drive, at Savannah/Hilton Head International Airport, Friday through this Sunday. The Commemorative Air Force also has a P-51 Mustang available for rides, and a Dauntless dive bomber.