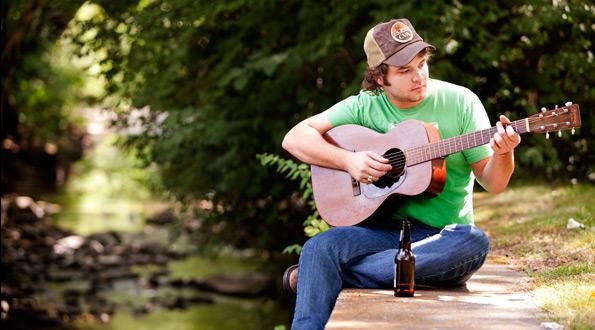 Patrick Cobb, an appliance repairman from Ellaville, in southwest Georgia, had a country band on the side. In 1992, he turned down an offer from Nashville to write and sing professionally. The Cobbs had two young children, and Patrick didn’t like the idea of being away from home for long stretches.

Brent Cobb made his onstage debut, with Dad’s band, at age 7. At the American Legion Hall in Richland, he brought down the house with his rendition of Tim McGraw’s “Don’t Take the Girl,” falling to his knees for the song’s emotional crescendo.

As a teenager, Cobb fronted a band called Mile Marker 5, which had some regional success, opening for touring stars. In his early 20s he was invited to Los Angeles to record his original songs with Shooter Jennings (Waylon’s son) and Dave Cobb (Brent’s Savannah-born cousin, who was producing Jennings’ own record).

The album, No Place Left to Leave, didn’t exactly set the world on fire, but it led, after a few twists and turns, to Cobb’s moving to Nashville and signing a publishing deal. His songs have been recorded by Little Big Town, David Nail, Kellie Picker, the Oak Ridge Boys, the Eli Young Band and fellow Georgian Luke Bryan, who was instrumental in getting the 26–year–old situated in Music City.

Cobb has a brand new five–song EP out on Carnival Music, and he and his band will introduce new songs and old Saturday, Jan. 12 at Saddle Bags.

But the guy with the rich–beyond–his–years Haggardian baritone, who American Songwriter named a “Daily Discovery,” isn’t so sure he wants to be a big–time star. He enjoys his life at home, a whole hell of a lot.

You’re not an overnight sensation. You made your first record in 2006. Now you’re having another go at it. Has this been as much work as you thought it would be?

Brent Cobb: Right when you start getting into it, it seems everybody’s asking you “Do you want to be an artist or a songwriter?” For me, it’s always been that songwriting sort of came natural, so it’s something that I did anyway. And being an artist was something I had to work at. I guess everybody has to work at it. But it’s really been an effort that I had to put in.

I think maybe that’s the reason, because on that first album I didn’t know at all what I was doing. Other than I wrote all the songs, and I could sing ‘em, and I enjoyed playing ‘em for people. But I also like to have a home life too. I don’t think that I’ve been lazy ... maybe a little bit. It’s more that I like to experience a regular life, because that’s where my songs come from. I tried to tour as much as I could after that first album, but I think those two worlds don’t always work together.

Are you saying that you’d be OK just being a staff songwriter, getting your stuff together and getting better, and not being an artist?

Brent Cobb: There was a stint of time there, it was a conscious decision where I said “I’m not even gonna try to be an artist.” But then, something inside of me felt like “Well, then who am I writing these songs for?” Songwriting is therapeutic; it’s all about experiences I had myself. So it kind of took away from the honesty of my songs, and I thought “Well, I have to be the artist. I have to do it.” Sometimes you say “I don’t know if I want to give up every weekend and holiday for the next 25 years.” The other side is, of course, I’m only 26. I may as well, you know?

Would you like to be a successful artist? That’s a lot of stairs to climb to get to that 25 years of weekends and holidays.

A lot of guys in country now heard an amalgam of stuff in their early years. There was always a lot of rock ‘n’ roll. I know you’re a fan of Tom Petty & the Heartbreakers. How important was that to you, as opposed to Hank and Haggard and the great old country writers?

Brent Cobb: My momma is from Cleveland, Ohio. It’s the rock ‘n’ roll town. And my Dad’s from Georgia. I grew up in Georgia. I grew up listening to her brothers playing those (classic rock) songs. Also, my Dad was in a band playing the country stuff. During Thanksgiving, we’d do a dinner cookoff every year and we’d set up a little p.a. system on the back porch, and everybody who ever could pick would get up and pick. My uncle Brian and his brothers would do stuff like “Tangerine,” in contrast to the country stuff that my dad and his brothers were doing. There was always something so different and cool about the rock ‘n’ roll stuff. At the same time, obviously my heart was raised country. The contrast, seeing them right there in that same setting, really left a mark somewhere in my soul. To write that way.

What’s your friendship with Luke Bryan, and what has he done to help you?

Brent Cobb: Man, that’s a long story. After my first album, me and my band were opening shows in Southwest Georgia for Luke, and my bass player and best friend gave him a copy of that album, and he just really liked it. He kinda just took me under his wing, and invited me up to stay in Nashville. He’s sorta been a mentor, or an older brother, you know?

We don’t talk every day, or hang out every week. But surely there’s got to be some sort of native camaraderie or something.