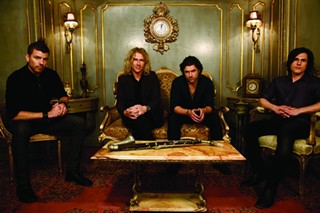 Children 3 and under Free

The son of a preacher (man), Ed Roland was born and raised in Stockbridge, Georgia, one of a galaxy of character-less Atlanta suburbs. In 1982, itching to get out, he decamped for Boston's legendary Berklee School of Music, where he studied guitar and composition.

Back at home, he then spent eight years as a sound engineer at Reel to Real, a small recording studio owned by the father of his bass-playing buddy Will Turpin.

("One of the first artists I ever recorded was RuPaul," Roland says, without a trace of irony.)

Along with Turpin, drummer Shane Evans, rhythm guitarist Dean Roland (Ed's little bro) and a lead player, Roland went on to conquer the world under the band name Collective Soul.

One of the most successful post-grunge rock bands of the 1990s, Collective Soul hit No. 1 on the Mainstream Rock chart seven times, starting with Roland's impossibly cool and catchy "Shine," which just missed the Top Ten on the Billboard/Soundscan sales chart.

Why did you choose to go to Berklee?

Ed Roland: I went because I'd been reading that a couple of the Cars players went there. I was really into the Cars. Walter Becker from Steely Dan had gone there. And where I grew up was really, really small; I was just looking to find people to play with. Nobody played music where I grew up. It was a small-town football town. And Berklee was, basically, the only music school back then. You know, I learned theory and all that, but I wanted to be a songwriter. I kind of figured, that's something life teaches you, not a teacher. You can learn certain formats, I guess, but what I wanted to do was life experiences.

But Atlanta had a pretty hopping music scene in the early '80s ...

History tells us that the first Collective Soul album (Hints, Allegations ...) was actually a collection of demos you made by yourself at Reel to Real. Was there no band at that point?

Ed Roland: Some of it was done there, and my manager at the time built a little recording studio in his basement. I would go there every day and write, and record. There were different players in and out, but it was never a band. It was intended to be a songwriter demo. I was trying to get a publishing deal. From that, we started getting radio play at Album 88, at Georgia State.

Will and Shane, who were in the band eventually, had a cover band playing frat houses. I said "Hey, can y'all learn a couple of my songs?" I would do five of my originals, and they would play cover tunes the rest of the night. I could go home. Then "Shine" started taking off, and I said "Guys, we gotta start taking this seriously. We're gonna play everywhere."

I always say it was a 10-year overnight success story. I literally sent CDs out to everybody, and I would call radio — which I wouldn't have the courage to do today — I would call the program director and tell him "Thank you for playing it," and they were like "You're calling me?" I didn't know any different, you know? It was the Southern gentleman thing to do.

It's been 20 years now — are you surprised that your first albums have had legs like this? All these years later they're still cherished by people.

Ed Roland: It's a blessing. When I wrote "Shine," I just put it down, I thought it was a good pop tune. I didn't think it was something that would launch a career. Twenty years later, people still sing it with enthusiasm. It's something indescribable. You almost have to be in the moment. It's like seeing a picture of the Grand Canyon — "oh, that's cool," but then you go see and you're like "Whoa, I did it now!"

Tell me about your other band, the Sweet Tea Project.

Ed Roland: About two years ago, I had a couple of weeks off, I came home and re-connected with some friends of mine. They do the coffeehouses around Atlanta. Every song I write's not a Collective Soul song, so I just showed them some song ideas I had. They showed me theirs. We did a show, people really liked it, and we said "Let's make a record." We made a record, and people liked the record.

It's just very organic. It's very reminiscent of what happened 20 years ago. You're doing it for the fun ... of course, for the chicks, always! ... but then it just takes on a life of its own. And it's just been a blast.

I always like to say that Collective Soul is my pride, because nothing would happen without Collective Soul. But Sweet Tea is my joy. I love it and have so much fun with it.

So I'm blessed. I have pride and joy.