BE HONEST —how often do you recycle?

Recycling can often be a tedious task, so you’re forgiven if you’re not a habitual reuser. But the Revival Society has set out to change the attitudes surrounding recycling.

The Revival Society is a group of creative makers in Savannah who focus their talents on ecological design. Their first project, Bottle Monsters, allows students at Derenne Middle School to use reclaimed materials to build a monster that eats plastic bottles. The monsters, along with a large dome installation, will be at the Earth Day Festival in Forsyth Park on April 21.

1. How did the Revival Society get started?

KS: I always knew I wanted to start a group, but I didn’t know with who. Then I met everyone and it just felt so right and spiraled from there. Everything fell into place—people really want ecological design. Not everybody was geared towards sustainability—I probably am the most obsessed with it—but we now challenge each other so it’s like we’re keeping each other accountable.

It’s not that there’s a specific owner. I might have founded the idea and the name, but it’s sort of a culmination of all our ideas and we brainstorm the next way to go about things.

2. Tell me about the Bottle Monsters project and how that came about.

KS: I met with the recycling facility and they can’t give us any material because it’s government property. Once it is in that trash can, I can’t take it. We have to think of a creative way to collect bottles and get excited about recycling. That’s where the Bottle Monsters came in. It was a quirky way of getting people to recycle and it was sort of funny watching people react to them. People really like them! And I didn’t realize this, but it bridges a gap between ages. The kids build it and the parents get just as excited about it. They’re almost transforming the parents’ ideas about recycling.

JR: We give them total creative freedom—they can make anything as long as you can fit a bottle in it.

KS: We went to Derenne Middle School and we have the kids building 20 monsters there. It overtook everything I was doing and consumed all my time, but the kids really needed it. They really rolled their eyes in the beginning, but we presented it as, “We’re really idiots in the way we designed the world for you. You’re the ones who have to deal with the waste we created. The recycling facility is sort of a figment of being good.” 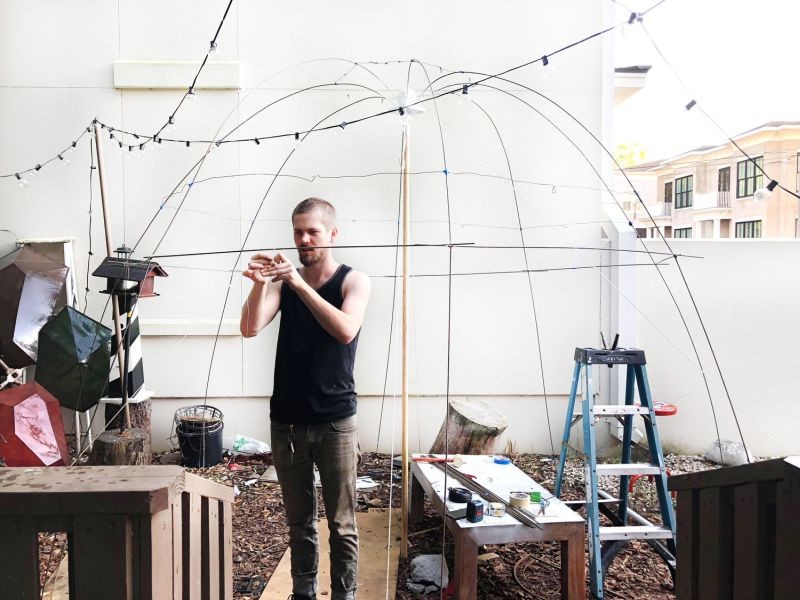 KS: It’s so toxic to burn plastic. They’re saying the melting of plastic is very profitable for them right now, but it hurts the Earth. So, where is the profit? You’re decaying our world and then paying for it later. It’s only profit in your pocket, but hurts the next generations to come. As cheesy or as hippie as it sounds, that’s truth. You can’t deny it. You can make money off recycling, that's the thing.

JR: Even just to make a profit to sell reclaimed material, it’s not a hippie thing anymore.

KS: The original design of plastic was never meant to be for a second life. Making plastic into something else is actually more toxic than just making something new. When people are like, “Yay, I bought a recycled rug!” I’m like, “Ooh, you really shouldn’t have.” They’re pumping more fumes into the environment.

I think it’s a lot of secrets, and I really want to make a company that’s a little more transparent.

4. What can we expect from the Revival Society for the Earth Day festival?

JR: The dome sculpture will be in the middle of the field at the park. It’ll be like a big fuzzy Afro that’ll move in the wind. I’m curious as to what it’ll sound like. We’ve reclaimed steel for it. We’re trying to use as little new material as possible, but we did use some new steel.

TG: Basically, this CNU project is our first project all together. Krystal and Jeromy had this sculpture planned already. It’s also going to be displayed at A-Town.

5. What do you hope is the biggest takeaway of your project?

KS: Reality. The reality of the situation. Recycling systems aren’t working. The only way we can do it, because the top’s not doing it, is to rise from the bottom and make changes. People like to laugh about it and then they do something about. “Ha ha, we’re recycling! Look at this thing!” And it’s not merely, “Ugh, I gotta split plastics.” This town is too cute to not be sustainable. CS