THIS WEEKEND marks a year since the Women’s March on Washington, the historic protest in opposition to Donald Trump’s oppressive rhetoric against women and other minorities.

It’s also been a year since SCAD grad student Becky Slivinsky attended the Miami march, a trip that intensified her passion for women’s rights advocacy.

Slivinsky, a painter, creates T-shirts that read “Objets de Désir” in an effort to empower women. The shirts correspond with her current body of work, where she paints with cleaning products over advertisements featuring women.

We spoke with Slivinsky last week.

1.What did you take away from your trip to Lacoste, France and the Women’s March in Miami?

My trip to Lacoste was amazing. It was eye opening to step out of our political climate for a few months and see what other cultures were like. It was interesting to see how female sexuality was displayed in comparison to the United States.

The Women’s March was also life-changing. Being surrounded and embraced by people of different backgrounds and ethnicities was truly refreshing and gave me hope for our future since I feel we are going backwards in so many different aspects.

2. What inspired your current work?

About a year ago, I shaved my head in solidarity with my mother, who was diagnosed with cancer. With this major physical change I began questioning standards that seem to be expected of women. I was, on multiple occasions, approached by strangers asking things like, “Oh, you cut your hair? I like it better the other way.” What person has the right to voice their opinion on what another person does with their body?

I began looking at how women were portrayed in the media, starting in the 1950s. A lot of the ads objectified women and used them as a commodity to sell things. Just a few short decades ago, it was expected of women to stay at home and do the cleaning, cooking, childcare—the “housewife.” So I also started experimenting with cleaning products in my work.

Today, women’s bodies are still being used as a commodity in advertising. I use cleaning products directly on the image. The use of cleaning fluids started off as a reference to the housewife, but the meaning of them has evolved. Now, by spraying, pouring, and wiping cleaning products across the image, I am obliterating the woman’s objectification. 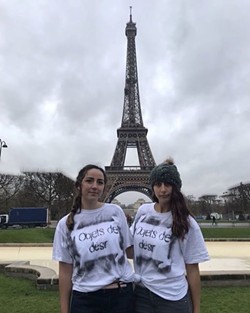 3. Tell me about your Objets de Désir shirts.

The T-shirts go along with my current work. Since my posters are images directly pulled from the media, I saw the phrase “Objets de Désir”—which translates to “objects of desire”—in a magazine and I knew that I wanted to incorporate that into my work. I decided on T-shirts because it seems that women are coined as objects of desire, and it’s almost a label.

The phrase is spray-painted onto a large white T-shirt, so each shirt is slightly different and unique because women get slapped with this label, no matter what they look like.

It’s even more relevant than ever because of the sexual harassment cases and how the government has been making efforts to take away our birth control and our reproductive rights.

I would love to do the shirts in other languages. I started in French because I was in France when I thought of the idea. I want it to be relatable to women all over the world.

4. Why is taking a strong stance in your artwork important?

Having a personal connection to your artwork makes it stronger, because it has to be something you’re passionate about. It makes the work more approachable and hopefully relatable to the viewer. Sometimes, art is what opens people’s eyes in a different way.

5. What do you hope viewers take away from your work?

I hope people begin to analyze the way advertisements impact our everyday lives. I can only speak for women, but so many magazines targeted to the female community talk about ways to change your appearance, whether it’s makeup, hair, or body type. I hope that through my work, women realize we don’t need to use our body for approval. You’re beautiful just the way you are. Every woman is beautiful.