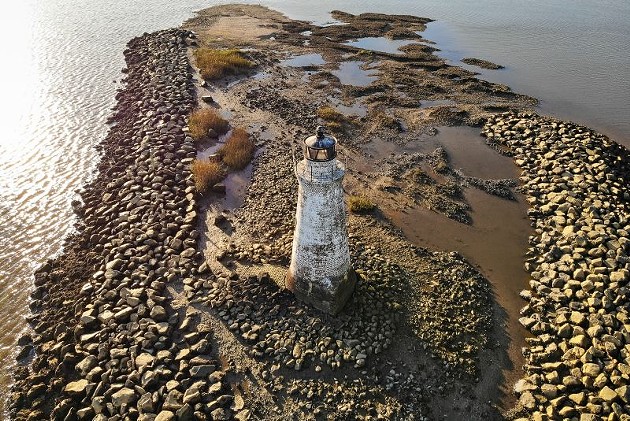 SEE SAVANNAH in a new way with Chris Ryba’s photographs.

Ryba captures all the familiar scenes of the Lowcountry, like Tybee and Cockspur islands, but taken from a drone high above. The drone can get closer than a low-flying aircraft, so the resulting photos are awe-inspiring and something you may not have ever seen before.

Ryba’s photographs are currently on view at El Coyote’s upstairs oyster bar now through the month of September. 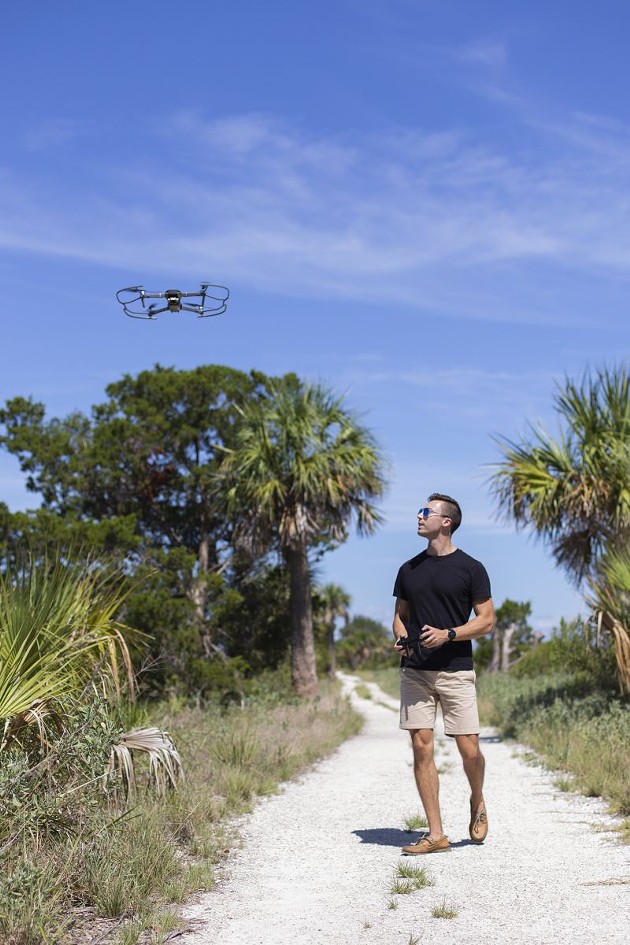 We talked with Ryba last week.

1. How did you get started with drone photography?

I went on a trip with my friend who’s a pilot and he took us on a trip down to St. Simon’s Island and Jekyll Island, and I took my camera along and was doing some stuff from the air. That’s when I realized, “Wow, this is cool.”

We flew over downtown so you could see Savannah in a way that I felt nobody was really photographing, or if they were, it wasn’t really being pushed out to the public. That inspired me to buy a drone, so I guess that was my foray into drone video and photography.

2. Tell me about the drone you’re using.

DJI is the leading consumer drone manufacturer. This is a Chinese-based company, and they have a few different lines—the Phantom, which is a big white boxy-looking one, that’s a rigid body. With this Maverick line, they’re all unfoldable. Everything I’ve shot is just on this little thing. It’s a gimbal-mounted camera, it’s automatically stabilized within the camera. As you fly along, it just stays perfectly level. It’s been a confluence of a lot of things—GPS technology, sensor technology, this camera can shoot 4k and it’s the size of a few dice. Hasselblad recently bought this company. All the control technology helps them provide feedback and stabilize the camera. It streams 1080 video, and you can see it as you’re doing it. It’ll go 42 miles an hour and it can travel up to five miles away from this controller.

A lot of people think it must be hard to fly, but honestly, it’s like a video game. A three year-old could fly this thing—when you’re not actively giving it any input, it just hovers there, so there’s not really too much danger.

3. The technology you use makes it simple to capture these shots, but what’s your photography background like?

I was a self-taught photographer. I got my first camera when I was 16, and I did high school yearbook, worked for my college paper at the University of Michigan, and then did a variety of freelance stuff here and there. I mostly focused on landscape and travel photography and lifestyle photography as I went different places.

I had about ten years of photography experience at school, mostly in the still photography realm, so all the composition, the lighting knowledge, the color correction and the framing that all goes into being a good photographer came from that experience. By the time I got this drone, I just had that in my toolbox.

4. What’s your approach for this body of work like?

For this work specifically, the co-owner [at El Coyote] approached me since they were looking to participate more in the Starland arts scene, especially with First Fridays. She wanted to put some art on the walls and have a good relationship with local artists, giving them exposure and also doing something that matches the feel of the oyster bar. Her idea was to get some water and sand, something that makes you think about being on the water.

It’s not the only type of work I do. This body of work ranges from places such as Tybee, coastal Florida, coastal Georgia and South Carolina as well. A lot of what my more technically-minded brain thinks of is definitely looking for symmetries. With a lot of these, it’ll have symmetry and then the addition of manmade structures.

People will message me and ask how much I manipulate some of these photos, and I certainly add some contrast, but I’m really just enhancing the colors that are already there.

There are a lot of layers to the work. I like symmetry, so I look for those patterns. The overlap of the manmade with nature, I think, is really cool. Waves are cool to look at, but I tend to gravitate more towards seeing where we’ve left our mark on nature.

5. When did you realize you had a really unique concept on your hands?

I was starting to show these things on my Instagram and I realized that people really enjoyed them. The first one I ever posted was Forsyth Park, top down, late in the evening and the colors were just starting to change. You can see that rich blue water in the fountain. People didn’t know where it was right away. You’ve seen the fountain so many times, but from so many of the same angles. And then people go, “Oh my God, is that Forsyth Park?” It just totally blew people’s minds.

Once I found out people were really into it, I realized there was a lot of opportunity for people who wanted higher quality video marketing videos, commercial videos, music videos. After that happened, I decided to get into the business side of things. In order to do commercial, you have to get an FAA certification. I do projects for people who want to convey the scope and the scale of it, and gives a sense to this larger-than-human scale. I think people love seeing that.