EMILY EARL has been a mainstay in Savannah’s art scene for a while now, so her stint in the spotlight has been long overdue.

Earl is the winner of this year’s APG / High Museum Purchase Award. The High’s assistant photography curator, Gregory Harris, selected seven of Earl’s photographs from her Late Night Polaroid series to be included in the High’s permanent collection. On Aug. 17, APG will present the award to Earl in a reception at the APG Gallery.

Earl is a co-founder of Sulfur Studios and works as the Director of Public Relations there. She also operates Prismatic Prints, a print shop, out of her studio.

We talked to Earl about the path that led her to this award, what makes a good photo, and the fortune of a good yard sale.

1. Congrats on the award! How did you end up winning?

Emily Earl: I had four pieces from my Late Night Polaroids in this show at the Museum of Contemporary Art in Atlanta called Edge to Edge—it was a survey of contemporary photography, of just Georgia photographers. The MOCA is in this warehouse space where downstairs there have all these different galleries, and one of the galleries separate from the MOCA is the Atlanta Photography Group [APG] Gallery. When I was in Edge to Edge, I ended up going to that gallery and following them online, and I found out they do an international call for entry for a portfolio every year. I was like, well, I was just in this show in the same building, and maybe I'll get it. So I just went for it. I really didn't think I was going to get in because it's international, and I got in.

Six or seven photographers were chosen for the Portfolio 2017 show in the APG Gallery. The grand prize was they were gonna have Gregory Harris come in and pick one of the bodies of work from the show to be bought for the Purchase Award, and he picked me. It was totally crazy. I was super surprised—I was really not expecting any of that.

2. Tell me more about the Late Night Polaroids series—how did it come about?

So, I went to a yard sale. [laughs] She was a photographer moving out of the country so she was selling everything. I got this really awesome Polaroid camera from her for $2. I realized it was broken, so it sat in my closet for a year and one day I fixed it in five minutes. I went downtown with some friends and took a couple pictures, and I was like, "Oh, my God, this is amazing!" That's how I started doing it. It was more for fun at first, but then I got so obsessed. The quality of the images in terms of tones and sharpness was great. So what I do is go downtown, shoot Polaroids, put them in the box in the end of the night in a stack, then I come back and scan them all in. If I'm really excited about them I come back that night. I scan them in super-high resolution, then edit in Photoshop, and then I print. 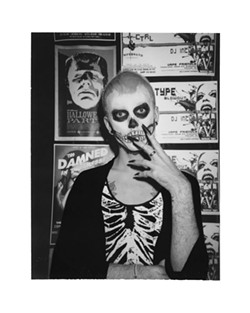 3. How do you judge your Polaroids for success?

I look for the technical elements—good exposure, composition, how sharp it is. With Polaroids, it's not through the lens focusing, it's a range finder, so I have to guess how far away it is from the camera. I won't know if it's in focus until I've got it and am looking at it. A lot of this happens so quickly that the person's gone. I've gotten really good at focusing, so it's not an issue, but it is something I'm nervous about every time. All that boring technical stuff for sure, but I think most photographers will tell you, you know when you've got it. When the moment is right, you know it. I use a flash and the flash is really bright on this thing! Eight times out of ten, they're like, "Oh, I blinked," and I'm like, no, you didn't. I know that was the shot of the night. It's an intuitive thing. I also think a lot of this is because I'm so familiar with the city that I kind of know, I really love certain backgrounds. I'm like, "Okay, if someone walks over there, I'm gonna take it."

Something that I really care a lot about for my personal photography is what makes a timeless moment, and what imagery or symbols stick with us through time, and how to play off that. Last week I went down to Mata Hari to take pictures there, and there’s one girl doing her lipstick with the phone camera and another girl in front of her furiously typing on her phone. And I’m just like, how crazy that we’re standing in this old historic kind of cobblestone tunnel. The juxtaposition is bizarre. 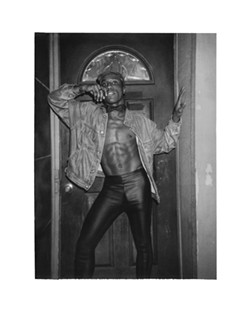 "I Saw Him Standing There" by Emily Earl.

4. How do you think this award will affect your personal career?

I don’t really know yet. I certainly can’t predict that. I feel really honored to be included because just looking at their website, the photographers they have in their permanent collection are some of my ultimate idols. So just to be in there next to some of these people is pretty insane. Definitely in the last two years, I’ve had some really great luck with my personal work and I feel really good about that. We’ll see what happens.

5. With all the projects you’ve taken on, how do you carve out time for your own art?

I’m so busy doing stuff here that in the last two years, it’s been challenging. When I first started doing [Late Night Polaroids], it was 2012 and I had two part-time jobs, so I had a lot of time to work on this. Now I do so much for the studio and the print shop [Prismatic Prints], and it’s tough to balance it. But it’s really important to me to remind myself to continue making more, and as long as I keep a good flow going, it’s all good.