Shawron dresses up and photographs her subjects, then prints the photograph and embellishes on top, resulting in a piece that’s glitzy and a little weird—but that’s just the way she likes it.

“Painted Ppl” will be on display at the Rat on Bull by appointment through the month of November.

Shawron came to SCAD in 2013 to major in fibers and now works full-time for shopSCAD, working on her art at night. 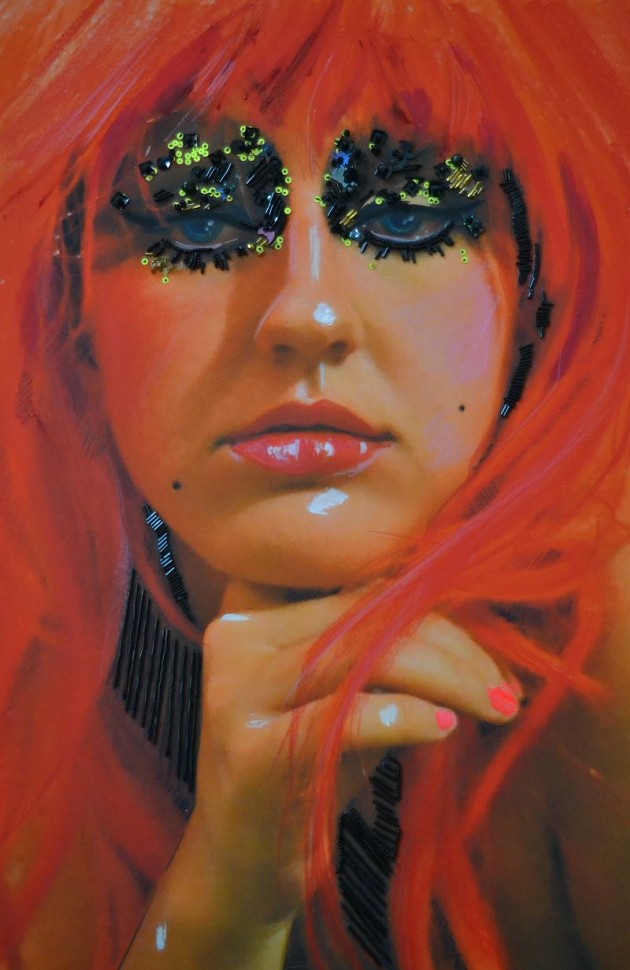 We caught up with her last week.

1. Tell me about this body of work.

This show is going to be called “Painted Ppl.” It’s all photographs of friends of mine, people I’m close to. I’ve had crazy photo shoots with wigs and makeup, and I printed them out and then beaded and painted and did all these additive processes on top. It’s all these portraiture things. It was kind of a theme when I was in school, just photography in general. I like to document and remember things. But this body of work is a more outlandish, crazy, drag queen kind of vibe.

I feel like once I’m done with it, I’m going to move on to something else. But this was a big theme and I wanted to showcase it.

2. What’s your inspiration for this body of work? I feel like Cindy Sherman has to be in there somewhere.

Her self-portraits, yeah! When we were little, my mom and I used to color together in coloring books, like Barbie stuff, and she was so good. Like, she’d give Barbie blush and contour her face. She went to art school, too. I remember being six and being like, “How is she so good? How do I get this good? Now I want to concentrate, I want to be better.” So I kind of put it back to that moment and her decorating people, and I feel like that’s where it sort of began.

3. How do you find the models who model for you?

It’s usually friends of mine or people I just have an idea for. I want to do something with cake now, but I have to find someone who’s willing to cooperate, people who don’t mind being kind of gross. [Editor’s Note: That person was me.] I like getting messy. So far everyone’s been like, “Yeah, let me know!” and I’m like, “Nah, you don’t sound sure.”

It’s harder now that we all have jobs and need money and stuff. But for the most part, it’s like, “What day works for you? When can we do this?”

It’s a lot of mentoring. People don’t know how to present or price. You don’t know if you’ve never done it before. How are you supposed to know how much this shit costs?

It’s hard sometimes. There are people who genuinely appreciate the arts and everything, but then there’s other people who don’t prioritize it. I feel like to find people who appreciate it is a luxury, not just someone who’s like, “So who’s going to be famous in here?” We get that a lot. “Who’s the next Picasso?”

5. What was it like linking up with the Rat on Bull to show your work?

It was honestly pretty frustrating. Not with the Rat on Bull specifically, but just in general. There are so many places I reached out to that never wrote me back or called me, and a bunch of places that used to be here aren’t anymore, like Non-Fiction [Gallery]. It was the perfect space and now it’s going to be a day spa or something.

The Rat was really cool; they got back to me. I think the problem was that I started planning this in the summer. I just wanted some place to be like, “Yeah, we can do that.” A bunch of places only do group shows, don’t branch out.