PAINTER Kara Adoff has been in Savannah since 2014 and has big plans for our city’s art scene in the New Year.

She’s set to open West House, an art bar, in the old Welmont space in January.

West House will offer studio and coworking space as well as a gallery and a bar, and Adoff seeks to support artists as well as restore intimacy to viewing and interacting with art. The space would energize the stretch of Montgomery St. that it sits on, as well as making the Savannah arts scene less insular by reaching out to touring artists.

We spoke with Adoff last week. 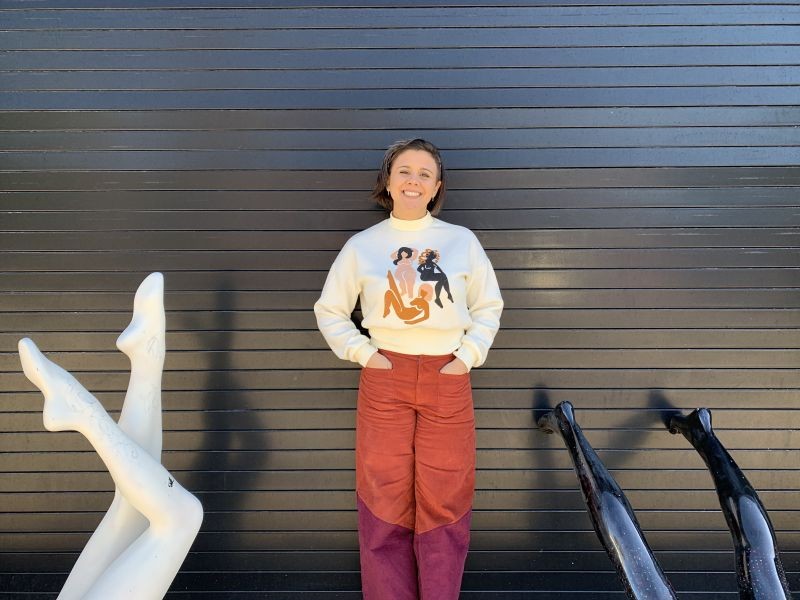 It’s very thick, it’s sort of a sculptural oil style. I am a little bit snobby—I don’t like acrylic. I only like oil because it’s about the intimacy, about the buildup. It’s a little bit about the challenge.

With that said, I paint really fast, so I’ve done a couple things that are more realistic, but the best way I can describe it is it’s a little bit like Basquiat in that I like to build up a narrative and make it messy. I also like Dana Schutz in that I want the intelligence to be there in the story that I’m painting, and I want to be able to see the techniques and the time that it took.

It’s not a classical style of painting, and it’s also evolved a lot since I’ve become a mom because you can see where I obviously could take time and let things dry, and now I do it a lot quicker, a lot messier. I love to paint out of the tube.

My mom came before my show [at White Whale] and she did touch one of my paintings. She was like, “Kara, it’s still wet!” and I’m like, “Yeah, it’s oil!”

I really want the whole place to feel like a maximalist art installation, for one. It’s making it fun again, and intimate. If you’re not an artist, I think you don’t know how to interact with art—I see that with my husband. I’d like to have catered dinners where we bring in little tables and people eat, and then maybe at the end of the night they could drink a bottle of wine and now suddenly you’re going to buy that painting, because people aren’t spending enough time with art. This is sort of taking it back to that 1890s Paris where people sat in a lounge and they bought art because they knew the artist.

I’d eventually like to not charger artists at all. I just want to be a supporter of arts; I can be this Peggy Guggenheim. We need the bar, we need the coworking space. A lot of people are like, “Savannah needs to be local,” but we have plenty of galleries that are showing local artists. Me coming in as an outsider was really hard for me to get into the art scene.

I feel like I’m coming at the right time with developing a business that is a person, because people are coming back to wanting things to be nostalgic. They want to be connected with it. Fast food is going out. They want things that are cutesy and identifiable and feel cozy.

3. Was there a moment that you knew this is what you wanted to do?

There was a moment. I was a stay-at-home mom and then, cold turkey, my kids were going to school five full days a week. It was the fourth day and I was like, “I’m going to watch Queer Eye.”

It was a woman in St. Louis and she started the Latino Arts Festival, but she was very indie and trying to fit into this posh art market. Instead of redoing her house, they did her office. I was like, “Maybe I should get an office; maybe I’ll do something like this.” I started looking up places and I came across this space and it was exactly what I wanted: a neighborhood in the outskirts of Savannah. I called and it was Charlie [Crosby, owner of Welmont] and everything was so serendipitous.

All I ever wanted to do was art. This is a big space, and I know that art isn’t enough—that’s a really hard market to make a successful business. So I was just like, “I’m going to do it by myself and figure it out.”

I love that question because I’ve started saying “West House 2020” like a campaign slogan. Savannah just had a huge turnover politically, which is going to make a huge difference especially knowing these people come from these districts. Savannah is its neighborhoods. Coming in the location I am, I want to bring locals back: people from the Islands, people who stopped going downtown.

But I also really want to elevate Savannah to a level of Philadelphia, New York, Santa Fe, which is what I think has been missing. SCAD is so great, but it’s just so SCAD-oriented that I want a place that is more worldly.

You know like they say you learn more when you study abroad? Maybe coming here is like studying abroad. I’ve got some friends from Knoxville and Los Angeles and London, and just growing Savannah a little more progressive and keeping its heart. We want people to travel from out of town for shows. Savannah has an arts scene, but they’re not known for bringing in artists, whereas people will travel when a certain artist is showing or they’ll watch that calendar. We can still be Savannah and we can be bigger.

5. What’s the key to getting artists to stay here?

Branching out a little bit more like this. Savannah makes sense that you would stay here. There’s a beach and water is so important for creatives, Atlanta’s close, Charleston’s close, there’s a direct flight to Newark. We just need to do more, and I think we need to have more diversity. We need Sulfur, we need Laney Contemporary, and we need things in between.

Savannah’s going to get bigger, though. I think this is a really exciting time. I remember I was on a Pedicab and someone said we were the Southern Brooklyn, and they were like, “Yes, and no.” We can be supportive to a high variety of creatives like Brooklyn is, and hopefully not price them out.

2019 was wack. It wasn’t terrible, it wasn’t great, and we’ve come out at the end being like, “We need a fucking change,” and people voted that way.