“I Bleed All the Time and I’m Fine: Social Practice and Menstruation”

Open studio hours are Saturday from noon to 5 p.m. On Oct. 26, Rosenstein will host "Talking About Periods," a facilitated conversation about menstruation. View the culmination of Rosenstein's project at First Friday on Nov. 1.

THIS election season, you might see a new name among the usual smattering of yard signs: Menstruation.

Artist Karina Rosenstein is performing a two-part social practice project titled “I Bleed All the Time and I’m Fine” as part of her ON::VIEW residency at Sulfur Studio.

The project involves a faux political campaign and an offering of a confidant, both designed to destigmatize the act of menstruation.

Rosenstein is primarily a fibers artist and is pursuing her Masters at SCAD. We caught up with her last week.

1: Tell me about your project for the residency.

The project is called, “I Bleed All the Time and I’m Fine.” It’s composed of two social practice projects—one is called “Menstruation for President” and the other is “Menstruation Confidant.” They are an attempt at making fine art that deals with this bodily process in a way that is very accessible. I make fine art, I make objects, too, but the people who see those is such a limited group. I wanted to make work that was social practice, that I could talk to as many people as possible.

“Menstruation for President” is this faux political campaign with a real mission, and that mission is to make menstruation more visible, periods more visible—whatever people call them. And that’s it. It’s not really very concrete outside of that, but it’s going to involve the various elements of a political campaign, like the campaign office, which is Sulfur. We’ll have canvassing, so knocking on people’s doors. That’s the most important part of the project.

“Menstruation Confidant” is more subdued; it’s an ongoing thing. I’m going to give all my volunteers patches that say “Menstruation Confidant,” and they’re going to wear then for about 30 days, wherever we can, on our normal clothes. The goal is to make space available for people to talk about their periods because maybe otherwise they don’t have that space.

2: The political campaign is a really interesting choice, particularly in election season. What was your reasoning for that choice?

The reason I’m choosing the political campaign is I’m hoping to use it to make organizing about menstruation more palatable. People will recognize all the forms I’m using—they’ll recognize canvassing and lawn signs, they know what a campaign office is. So if I can do things that people already understand, but I’m talking about something that’s a little taboo, they might be more willing to engage.

It’s really daunting, I think, to canvas. At least if you haven’t done it before. I have that experience and I know I can talk to people and put myself in very vulnerable positions, where someone could choose to shut the door in my face if they wanted.

There’s also this element of, I’m not from the South. I grew up in the suburbs of Chicago and then went to undergrad in Massachusetts. It’s culturally very different and I don’t know how people are going to respond vs. where I grew up, where I think there might be more openness.

3: There’s currently a lot of conversation about reproductive rights. How much did that factor into this project?

It’s definitely a part of it. Our sexual health and reproductive health education is generally very poor, and mine wasn’t very different. I want to make the distinction that I’m not claiming to be a medical doctor or an expert on the biology of our bodies, but what I am excited for is I’m going to be bringing a lot of my own books and research to the residency space. The campaign literature will have a fact sheet on it.

I don’t necessarily have an agenda outside of [making visible] menstruation, but I want to have people understand that it’s something that isn’t necessarily define your womanhood. It’s not something all women do; it’s not something that only women do. Gender-nonconforming, trans, non-binary people might menstruate as well. And for them, and for everyone that has a period, it’s important to conceive of it individually, to create your own narrative around it.

4: Is this project indicative of the type of work you usually do?

Social practice is new to me. Before coming to SCAD, I studied design and worked for an ethical factory based in India. Coming here, I decided to turn my attention to art, and that gives me the most freedom to say what I want to say. Generally speaking, I make soft sculpture. This is a part of my thesis, actually, and it’s been a hard break between what’s come before. Usually I’ll [make] work about intersectional feminism and it’s more about that, but more niche. Everything right now is red. I’m doing things that are light and funny and kind of unrelated to everything else, but in being unrelated, they are related because they give us a break. They allow us to continue with the work we’re doing.

5: What do you hope people take away from the project?

It depends on who they are. There’s a scholar I like a lot named David Linton, and he writes about periods, which is cool that a dude writes about periods. There’s an essay he wrote called “The Menstrual Masquerade,” and it’s about how menstruators go through our lives pretending we don’t menstruate. We hide our products when we go to the bathroom. We never talk about it. If someone has their own menstrual masquerade, maybe they’ll recognize it. Maybe they’ll start to pull it away. That’d be lovely.

Really, it’s about destigmatization, whether that’s coming from someone that experiences periods or someone who never has and never will. If there’s a more willingness to talk about it, that would be ideal.

Another scholar, Chris Bobel, is this huge figure in feminist writing about menstruation, and she essentially says unless we’re willing to talk about it, we’re never going to resolve any issues related to it. That’s why I’m doing this work. 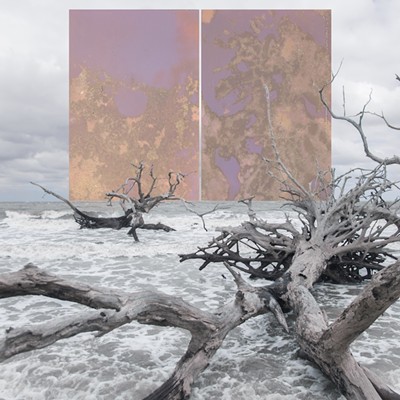