"What We Always Wanted" is Cunningham's first feature full-length film and is currently in pre-production. Visit kodycunninghamfilm.com to learn more.

Having created several short films during his time at SCAD, Cunningham now turns his focus to full-length feature writing.

“What We Always Wanted” follows two teenage girls and their 25 year-old cousin, played by Cunningham, in the ever-present struggle of trying to figure out your true self.

The film is currently in pre-production and should start filming this summer.

We talked with Cunningham last week. 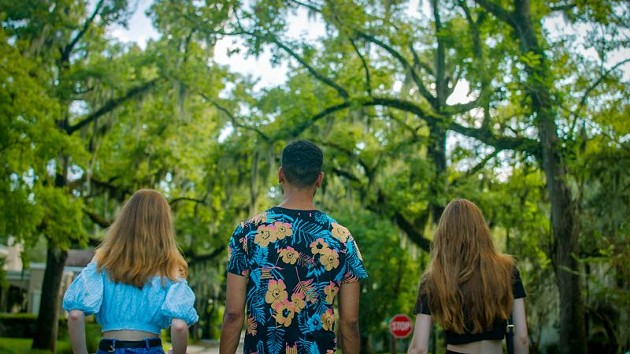 A still from "What We Always Wanted."

1. How did you get started making films?

I came to SCAD for film, but after that point was 2014, which was when the industry really started to boom in Savannah. My initial goal was to save up some money and go to Los Angeles or New York, but then I got another job, then another job. So I felt like, why move when the work is here?

Not having to go to a bigger market with higher rent prices and all that, to be able to work in the industry while still staying locally, has been very convenient and nice. It’s given me the ability to make my own work and write me own feature, which is what I’m trying to do now.

2. Tell me about your current film, “What We Always Wanted.”

I started writing it three years ago. My first narrative film at SCAD, my junior year film, starred a bunch of eight year olds. That was not the ideal first thing to work on. But basically, one of the actors that I auditioned got in the film. She didn’t get the lead, but after that I worked on a project with her older sister who was 14 at the time. Slowly, I started becoming a friend of the family. Right now, I wrote the script for those two girls and me, so it was me playing their cousin. And they’re little white girls, so there’s a little bit of a race issue as well.

But I didn’t really know what I wanted to write, just that I wanted to write something for them. At the time, they were nine and 14, and now they’re 14 and 18. The script is about our three lives, I would say. It’s a coming-of-age story taking three age brackets.

I feel like you always think in the next life benchmark, you’re going to figure things out. That’s kind of what I wanted to show with each different age bracket. 14, you’re about to go to high school; 18, you’re about to graduate; and then 25. Each one of them is looking to each other for some sort of, “Oh, and then I’ll figure my life out.” But you don’t get that. It’s that sort of idea, along with trying to find your passion, because our three characters are kind of in that realm too.

3. What has been your inspiration during writing?

It’s just hard. You have to have a third person perspective. That was my initial problem. One, I’d never written a full feature script, but the first two years was just a problem of me writing things that were very personal to me at the time that I was going through. It was very cathartic, but by the time I got over whatever it is I was going through, I’d be like, “Oh, well, this doesn’t really need to be in the script anymore.” I’m in it, so how can I see it?

It’s interesting because when writing this whole thing, my whole goal was to make it as autobiographical as possible and to insert myself as much into it as possible. And even still, I’m looking through some scenes, and I’m like, “This was my point? Oh, no, this is what it was about?” I didn’t even realize it.

4.: How did your writing process differ in writing the two girl characters?

I asked for their permission—not the parents’ permission but the kids’ permission; who cares what the parents think—but the situations in the script that we talk about, some of those are direct quotes from conversations we’ve had, like pulled from our real life. At some point, a younger character has these deep talks and one of the critiques was, “I don’t know if a character that age would say that.” I was like, “Well, she did, and that was two years ago when she was 12.”

The benefit is, it either works or it doesn’t. There’s nothing even close to in between. Working with experienced actors, actors figure out their go-to things to do that if they’re not in the mood or whatever, they can go back to their handbook. Like fake crying; things they can lean on. And sometimes as a director, I’m sitting there like, “Was this a genuine moment, or did they act well enough for me not to be able to tell the difference?” Which I get frustrated with. Sometimes I’m like, “That was good,” and then I look at some of their previous work and they’re doing that same thing over and over again. W

With adult actors, they’re always pretty good. They won’t be bad. But with a kid actor, it’s either, “Wow, that was amazing and genuine,” or they’re looking in the camera and we can’t use it.

Using kids can be a gimmick. With an adult character, in the first ten minutes on screen of the movie, the character has to earn watchability. You’re like, “I don’t know if this guy is interesting.” You have to learn the empathy as an adult. With kids, usually immediately as they’re on screen, you’re going to empathize with them. People say never to work with kids because they’re difficult, which they are, but I don’t feel bad about using them to pull on your heartstrings.