5 Questions with Nancey B. Price

BORN and raised in Girard, Ga., to a family full of storytellers, Nancey B. Price honors her family tradition through the creative work she does.

From writing to collage art to performance art, Price is a storyteller above all else. Her collage work centers the Black body and reimagines what that representation looks like.

Though she resisted placing her collage art on Etsy at first, Price was discovered there by a team at O Magazine, owned by Oprah Winfrey. Since then, Price’s work has evolved.

Price lives and works in Statesboro, about an hour away from where she grew up.

We talked with Price last week. 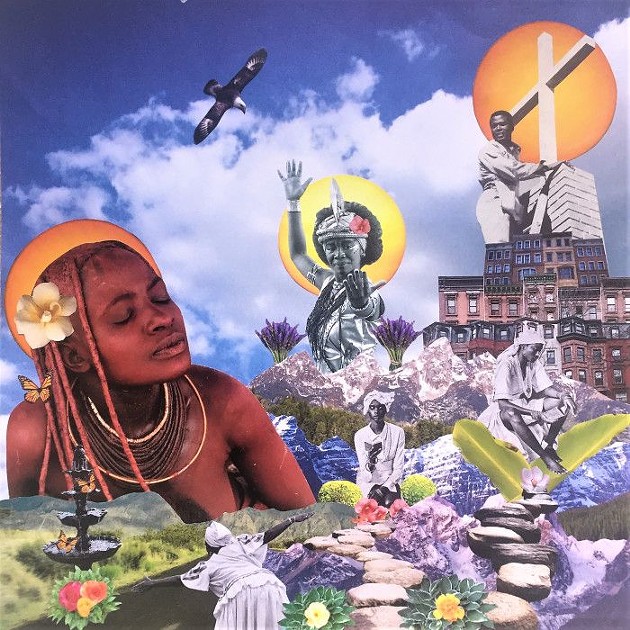 I always like to throw out Girard, Ga. as my hometown. It’s very small, very rural, but I can trace my lineage for generations in Girard. It’s mostly through oral history, because being Black out here in rural Georgia, you’re kind of limited as far as how much you understand about your story and your family.

For me, I can trace my history by name back to slavery. We grew up in the same area for five or six generations with both my mom’s side and my dad’s side. People say that growing up in a rural community has its limitations, but it’s also a privilege for me. I was able to grow up with, and up the street from, heritage.

I was born when both my parents were pretty young, and I was raised while my parents were going off to school or working. It was my grandparents and great aunts and uncles who were taking care of me while I was growing up. Sitting around on the front porch, listening to them talk and tell stories, that’s a part of my upbringing.

I always identify myself, regardless of whatever sort of art I do—I’m a collage artist, I’m a glider, I love performance storytelling—but storytelling is how I identify. It’s a direction connection to my heritage and my roots. I come from a family full of storytellers.

I don’t think I realized where the basis of my storytelling came from until most recently, when I realized that everybody in my family is a storyteller, so it makes sense that I am, too. I’ve always written stories. I still consider myself a writer before a collage artist, even though everything I do is telling a story. I can remember being in first grade and winning first place for a story about a haunted house.

2. When did you begin your collage work?

I feel like being in first grade was very pivotal for me! I remember playing with paper dolls a lot during that time. I had a whole collection: I drew the dolls, I cut them out, I had clothes for them. I’d tell myself stories with my paper dolls. For whatever reason, I grew up and forgot all about that.

Years passed and I was a very avid Etsy shopper. There was this collage artist, this black woman named Mirlande Jean-Gilles, and she makes very beautiful art. I was just looking at it like, “You know, I feel I can do this.” Not one of those things where you’re like, “This is easy. Even I can do it.” Something in me was telling me, “You’ve done this before and you can do it again. This is you.”

One day when I was home during Hurricane Hermine, I was like, “You know what, I’m going to make something today.” I didn’t know what I was doing, but I went downstairs and got magazines and scissors and started cutting stuff out.

I cut out a picture of this woman I found in a photography book. It was a Black woman crying and the story under the photo said she had just lost her son to the Vietnam War. I was like, I need to cut this out. I didn’t know what I was going to do with it, but I wanted to highlight her. Then I started cutting out flowers. That piece eventually became Blooming Grief, which was the very first piece I ever made.

3. Your work was featured in Oprah Magazine. How did that happen?

They found me on my Etsy page. I was reluctant to start an Etsy, but that’s how they found me. They were just like, “Yeah, we like this. Could you add this? Make it more detailed?” I was like, huh, okay!

When I did the Oprah piece, after that, my world of collage expanded and I started getting more interested, adding little details here and there, cutting out smaller pieces and building more intricate scenes.

4.How do you choose what to feature in the collages?

I choose what looks best and what’s available to me. As a Black woman, there is a lot of imagery that doesn’t reflect who I am and what I look like. When I started off collaging, it was never my intent to center Blackness and Black bodies. I was just creating art that I wanted to see. I wanted to create art that was important to me and something I could connect with, and I connect with Black bodies because I am one.

If you Google collage art right now, you’re not going to see many Black people unless you search Romare Bearden or something like that. My intention was to include, in as many of my images as possible, I wanted Blackness. I wanted to highlight all the beauties of it, the whimsical nature of Black people in different situations and having their bodies centered, being in worlds that people don’t typically view them in. Make them larger than life.

It can help change how Black people view themselves. As I was growing up, I dealt with my own internalized colorism issues as a little Black girl, even though Brandy was out and popping. I adored Brandy—I had the Cinderella movie, I had the Barbie doll, Brandy was key for me. She was this gorgeous dark-skin pop icon. I had Brandy, but I still had my own internalized colorism issues.

I was the darkest of my siblings; my mom is lighter than my dad, and I took on the darker complexion from his side. [I was] internalizing those images that the media displays of not just Black women, but then you add dark Black women on top of them—we’re always the evil person in the movies and stuff like that. It took me a long time to grow out of that and to really embrace and appreciate the color of my skin and how beautiful it is, to center that in my work.

I do admire the growth and development of my work. I guess that’s a shameless plug! Everything was flat pieces and the canvas works only came about maybe two years ago.

5. Where do you see yourself and your creative career in five years?

Honestly, I have no idea. I really don’t. I will say that I feel okay saying that; I used to not feel that way. I grew up very type A. I was premed for the first three years of college, so I grew up knowing exactly what’s the next step. When I came to the realization that being a doctor was not for me, I think that broke me down. Ever since then, I’ve learned to be less harsh on myself and not as timeline-focused. I used to be, “At this age, I want to do this and this.” But that leaves no room for life to happen. With me, after I decided not to go to medical school, I was just like, “Okay, life, what you got for ya girl?”

One thing I’ve realized about myself within the past few years is that I credit all this to therapy. I have been going to therapy since 2015 because I was a hot mess before. I just want to shout out to therapy and the beauty that can come from it. It took a lot of work.

One of the things was recognizing my ebbs and flows in creativity, whether that’s in writing or collaging or storytelling or anything like that. I have a peak season and I have a dry season. Giving myself that space to do it, that space to sit down on the sofa and not do anything for hours that’s creative or productive, understanding I just came off six months of hard work preparing for this art show.

Right now, I will say that I am coming off an ebb and am feeling creative. I feel that spark to start cutting stuff out and making stuff again. I made my first piece in like six months.

I want to keep riding my waves and relishing my downtime. As far as creativity is concerned, I want to keep creating but not feel like I’m obligated to do so for somebody else. That takes the fun out of it. Before Oprah, I was actually feeling like I wasn’t ever going to collage again. But the folks from Oprah emailed me and the creativity came back.

Hopefully, in five years I’ll have this mastered as far as my creativity and my ability to navigate this art space, this art world, navigate it while staying true to myself.