BY DAY, Nate Hinners is an art director at a marketing agency. By night—and weekend—he works on generative and audio reactive design, which is like a moving painting.

A relative newcomer to the Savannah art scene, the Chicago native came here on vacation with his wife and decided to stay.

We caught up with Hinners last week.

1. How are you getting adjusted to being here in Savannah?

My wife and I moved here almost exactly two years ago. We lived in Seattle for a number of years, then did a year and a half in Raleigh, North Carolina. We ended up in Savannah because it’s sort of that classic story: we came here just for a few days to celebrate our anniversary and really loved it, and we knew we wanted to move out of Raleigh because we didn’t love that. Raleigh is like the khaki pants of America.

Im terms of creative pursuits, for me, there’s work life and then art stuff outside of work. At work, I’m the art director at a branding, design and marketing agency called Clark Creative Communications. Getting plugged in through that has been really good. My boss is one of those people who’s a connector. “Oh, you know this person? I know a guy who does that. Let me introduce you two.”

We have a buddy in town we go back some years, with, Jason James. I’ve been teaching myself, over the last couple years, generative and audio reactive design. It takes the form of projections and projecting stuff onto a wall or the side of a building. Jason and I work together pretty often—he’ll DJ and run his audio through my laptop and do live generative projection stuff for shows and things like that.

2. How did you get started doing that?

Until the job I have now, my whole career is in large global advertising agencies. One thing about that is you’re always needing to have a reason for why you do something, because you always have to sell and defend work internally and also to clients.

With generative design, for me, that was kind of a reaction and a middle finger towards being so thoughtful about design work. It was a form of freedom for me to not have to think through everything and just let things happen based on computer code. It was a pretty freeing feeling to not know the outcome necessarily, but to put a bunch of things together and then just see where it goes and see what happens.

I’m very interested in the idea of textures within it. Rather than creating some type of recognizable scene, like a beach or a meadow, I’m very interested in pure texture. I find inspiration in all kinds of places, whether it’s the grungy part of a wall in an alley somewhere or the way that oil from a car on the street looks. I try to keep my eyes open to the world around me and then see how I can take those things that stand out to me and try to recreate them as best I can, or create something inspired by them on a computer.

The actual work process for that is a lot of trial and error. I’m really learning as I go. I’m fairly slow at it compared to people who do it for a living, but it’s a lot of sitting down in front of my laptop and spending a few hours just trying to see if I can get it close. There are certainly times where I have to shut the laptop, walk away and take a deep breath.

3. How do you balance working a creative job and your own creative pursuits?

That’s a really interesting dynamic, because it’s honestly something I wrestle with pretty often. There are certainly days when I come home and the last thing I want to do is look at another glowing rectangle.

What I do as an art director for clients, I have a hard time considering that to be artistic, believe it or not. To me, somebody who works on an advertising or marketing campaign or a brand identity system for a client, all of that work is rooted in solving some type of business problem. That’s much more about the ideas of hierarchy and the idea of communicating specific messaging or an emotion, all with the end goal of solving a challenge for a client.

So what happens when I come home? For me, that’s not at all about solving a business challenge. It’s purely my time to play. To create without constraints is a really welcome difference from the day-to-day of my job. I come home and have total freedom with no pressure, and if I do end up having to shut my laptop and walk away, it’s not a big deal.

Years ago, I had a boss who said something that stuck with me: “If you want to create art in your life, don’t think you’re going to do it by being a graphic designer.” Art is about expression; it’s about conveying something you’re thinking or feeling or reflecting a piece of the world you’re seeing.

Whereas graphic design and art direction for clients is always about solving a specific issue, so you have to get out of the way of what needs to be done.

4. When do you find yourself being most creative?

For me lately, it’s on the weekends, which I suppose is a fairly cliche answer but it’s true. As somebody who has a family, there’s a level of responsibility in life when you get home, so the weekend is when I can relax. 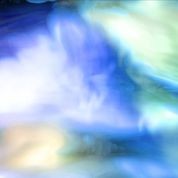 I don’t have the pressures of the workday on my mind; I don’t have something that came up during the day we have to figure out quickly on my mind. There’s just a lot more mental freedom and mental space to sit and create.

5. How did you get started as a creative person?

Thirteen-ish years ago, I was in my senior year of college in Chicago. I’m a tiny man, and buying clothes I like is really hard for me. One night I was like, “Man, I really need some T-shirts, but I can’t find anything I like.” I found a can of spray paint in my garage and a stencil of posterboard, and I painted a little design I made onto a T-shirt.

Over the next couple weeks, I did that on some more shirts with no plan or anything, but I got stopped on the streets of Chicago about, “Hey, I love your shirt, where’d you get it?” People would ask me to make them one, and I said no because the quality control of spray paint and posterboard isn’t very good, but it made me start thinking, “Maybe I can start producing some stuff and selling it.”

Over the next year I did a ton of research and started a clothing company, Head Vs. Heart, which I’m pretty sure I stole from a Death Cab for Cutie song. After about four years, I realized I hated running a retail company, so I stopped and went to a portfolio school in Atlanta. I met my wife there, and from there I’ve been in the advertising industry ever since then in Los Angeles, Seattle, and Raleigh at different agencies. And then I’ve told you the rest.

Creativity has always been sort of a common thread, even though it can take various forms.