PHOTOGRAPHER Robin Maaya is no stranger to vulnerability.

“Moulting,” the SCAD junior’s upcoming exhibition on view next week at Fab’rik, is a stirring collection of film photographs that confront a variety of issues.

Intended to be her coming-out story, “Moulting” is also Maaya’s way of working through a difficult repressed memory from her childhood. Maaya’s strength in telling her story shines through her incredible photographs.

We spoke with Maaya last week.

1.How did you get started with this series?

Well, the whole series was created with the idea of telling my coming-out story [laughs]. Even though everyone in Savannah and all my friends know that I’m a lesbian, and I’ve known that for a long time, I never really told my mom. And I like to go big or go home, so I figured I might as well use the series to come out to my mom. I don’t know how to just go up to her and go, “Hey, I’m gay,” but giving her a book felt totally possible.

It started out as a project for my photographic aesthetic class. I started out doing self-portraits, like figure studies and portraits of my own body, but for some reason, in the beginning, I thought the only way to tell a story about that was to do it through pictures of my body. So then it turned into something else that was more about objects and things and items, representing things that could be a coming-out story.

While doing the photos, I was also writing anecdotal things, like things from my childhood that somehow related to my coming-out story, things I’m feeling now, things that somehow go back to things when I was a kid.

Through doing that, about midway through, I came across a memory that I had pushed down for a long time. I was going through the process of finding out that when I was 11 years old, I was sexually assaulted by my cousin’s older friend. It was almost like telling myself a story about someone else. I had blocked it out for so long that I didn’t realize that it had happened.

I called my mom in the middle of the night and told her what happened, and something about telling her made it real and made me realize, “Okay, this happened. You have to do something with this.” My coping mechanism is to create stuff. Whether it’s hard or not, I have to force myself to do it. 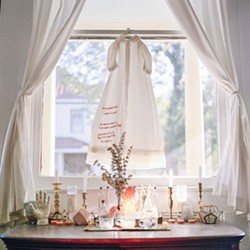 2.What happened with your work when you made that realization?

I felt that documenting my own body to express feelings of sexual assault wasn’t right; that wasn’t going to work. My intention was to wake up the next morning—it was Friday, when we didn’t have any classes—and take pictures of only things on my street. I wanted it to be a local thing that I see every day, but that I had never noticed before. I was looking for signs of destruction, damage, somebody leaving their mark on something.

That’s when I got the picture of the fence. There’s a tree with a metal fence on the inside, and my first attraction to it was that it looked like a vagina. I tend to find vaginas in everything [laughs]. It wasn’t until later that I realized it was about this beautiful tree that had completely taken over this fence. And you want to blame the tree, but at the same time, that fence shouldn’t have been there. That tree is where it grows naturally; that fence was put there. I was looking for things like that. I had different feeling crossing over. There were moments when I didn’t know how to feel about what I was photographing.

There ended up being self-portraits, but what was interesting was the ones I picked that are photographs of my body were the ones that showed the least skin. I wasn’t expecting myself to go that route. Starting the series, I thought it was all going to be self-portraits of me with objects, and now the series is totally not that!

3. What was it like for you to create such a personal body of work for public display?

It was interesting, but I’m not new to the world of being vulnerable. Last fall I did a series called “Girls Ward Left” and it was about my two months spent in a mental institution in high school. I ended up writing a book that went with that series, and that book was turned into a play in Ohio. It was crazy to go see a show, an actual play that was depicting my life. And not just the happy parts, but the scariest times of my life. It was very surreal, but going into this project, I wasn’t scared at all, because if I can do the other one, I can do this. It was just a different kind of vulnerability. 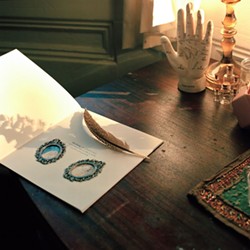 4. Have you always shot on film?

I learned how to shoot film in high school, but I didn’t do it too much. Last fall, I took the black and white class and that sparked a whole new side of myself. I fell in love with analog photography and old ways of doing things.

I love being in the darkroom for 12 hours at a time. It’s cathartic. I feel that way all the time. I always have expectations for how every print’s going to come out, and I get it and I’m like, “That looks nothing like what I expected it to, but it’s perfect.”

Since then, I mostly shoot film. I also take large format, and there are a few images in this series that are taken with large format.

5. What’s next for you with this body of work?

I think after this show is wrapped, I’m going to be done with it. I like continuing series, but at the same time there are certain ones I fee l the need to close the book on. I love being able to open something up and read about it and evaluate something within my life or something I’ve done.

But, I also feel like I started doing these shows because completing this show was like putting the bow on the box and putting it away. I have the option to go back to the box and review things I’ve done, but I think it’s felt complete for a while. Once the show’s over, I think I’ll be done.

I’m working on other stuff all the time, so it’s not like I’m going through a gap period. I constantly have to be making something—I don’t do well with sitting still.