“Wan Destination Wanhoop,” on view now in the Alumni Gallery at the SCAD Museum of Art, consists of three large-scale paintings based on archival footage of the Brokopondo Reservoir’s construction in the 1960s.

de Medina has a personal connection to this footage that he attempts to reconcile with the creation of this body of work. 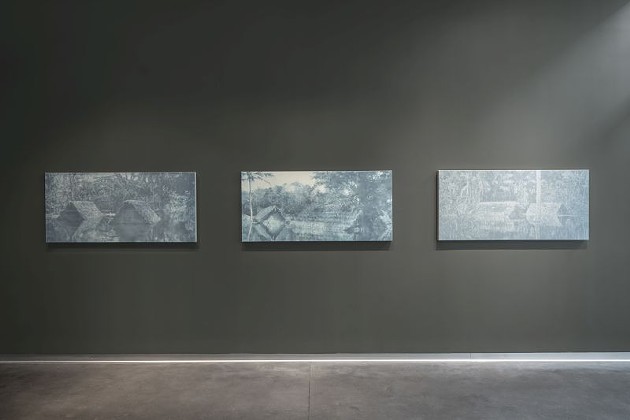 1: How did you originally get started with the body of work for Wan Destination Wanhoop?

I started working on the three large paintings in “Wan Destination Wanhoop” in 2015. There’s this incredible documentary I saw on YouTube, “Brokopondo en het verdronken land” (Brokopondo and the drowned land), about the history of the Brokopondo Reservoir in Suriname, which brought to my attention the immeasurable colonial and capitalist violence attached to it.

2: When did you decide that was a project you wanted to pursue?

I think I probably need to explain my personal history for you to understand how deeply troubled and confused I felt after seeing the documentary. I grew up with a famous artist grandfather. Stuart Robles de Medina, along with Erwin de Vries and Rudi Getrouw, is seen by many as one of the fathers of Surinamese Modernism. He was also in charge of removing the colonial sculpture of Queen Wilhelmina from Independence Square, on the evening of Suriname’s independence from the Netherlands in 1975.

My grandmother sewed the first flag for the newly independent Republic of Suriname, which replaced the colonial sculpture my grandfather had removed only hours before. On top of that, five years prior, my grandfather was commissioned to make a monument honouring the late Jopie Pengel, the first black Prime Minister of Suriname, which to this day stands on Independence Square, before the presidential palace. This sculpture of Jopie Pengel was my grandfather’s most ambitious work, and is even more important considering it established a tone of optimism during this critical time leading up to independence.

This is the narrative around my grandfather’s artistic accomplishments, which I grew up with, and inspired me to pursue a career in the arts as well. What was shocking to me, in the documentary, was the footage showing Jopie Pengel, visiting the Maroon villages in Afobaka, right before the flooding of the water reservoir. Pengel, who was Prime Minister at the time, is clearly trying to persuade the Maroons to evacuate their homes to help facilitate the project. For me, it is extremely difficult to grasp that he decided to try to convince Maroon people to evacuate their homes, for the construction of this massive dam, from which they would benefit nothing, and lose the grounds on which they had lived for centuries.

In retrospect, if we examine Pengel’s political slogan “Wan People Wan Nation Wan Destination,” translated from sranang tongo as “one people one nation one destination,” we might puzzle Pengel’s priorities as unifying the country, as a means to an end for economic progress. I later found a photograph of my grandfather participating at the 1967 trade fair in Suriname, for Suralco, and Alcoa, who were the aluminium giants behind the construction of the Brokopondo reservoir. To me it was very strange to see my biggest heroes, my grandfather and Jopie Pengel, participating in this “aluminium project” that was clearly violating human rights and damaging huge parts of the Surinamese rainforest and ecosystem.

The title for my show is meant to function as a kind of mirror to this “progress logic.” The word “wanhoop” in Dutch means despair, and thus the title carries within it this ambivalence, and confusion, as if asking, “What’s really the point of this corporate progress if most humans don’t benefit from it?”

I still haven’t resolved this in my mind, how to feel about this chapter in my own history, and where to place it in relation to my identity and privilege. It’s a chapter from my history I recall in every part of my life. In terms of how I treat people, how I choose to vote, and also in terms of the people, companies, and institutions I have decided to dissociate from.

3. What do you hope viewers will take away from the exhibition?

What I hope the viewer might feel from the work is that it is really difficult to confront one’s own history. It might be extremely uncomfortable and even painful to look at your ancestors and indeed even your heroes, critically, and examine where they failed. And whether or not the viewer shares with me the same views around ethics and sustainability, I hope they will see that history, life, and people are messy and paradoxical, and maybe the best we can do is to try to understand how these histories have led us to the present moment. And then in turn consider how we make the educated decision to break patterns of violence, negligence, and apathy to foster a more sustainable future.

4. What does it mean for you to have such an important body of work be your first museum exhibition and at such a signature event as deFINE ART?

It is very surreal, because I was in my graduating year when the SCAD Museum of Art opened. I can definitively point to one of the first exhibitions I saw at the Museum: Fred Wilson. I went to see his lecture, and it completely changed the way I perceived my own position in contemporary art—he explained his process of interrogating archives and of radically reconsidering and re-animating archival images and objects, simultaneously collapsing the barriers between researcher, historian, curator, and artist, opening up a yet undefined space that is a space akin to the one I consider myself to operate in now.

5. What’s next for you? Will you continue this body of work or move to something next?

In terms of exhibition opportunities, I am particularly excited about my solo “Faya Lobi,” which just opened in Paris at galerie Praz-Delavallade. The work in that show is very intensely related to the research in “Wan Destination Wanhoop,” to the extent that I perceive them kind of as twins or bifurcated shows.

I am ecstatic about my participation in May in Senegal at the 14th edition of the Dakar Biennale, where I also intend to extend the narrative established between my shows in Savannah and Paris.