PHIL BURGERS'’ The Passage, coming to the SCAD Savannah Film Festival on October 31, is a short like no other. It brilliantly fuses high-energy, bizarre comedy with the tone and vibe of a silent film. The Super Deluxe production, directed by Kitao Sakurai, finds Burgers' character escaping captivity and being chased by his captors amid a multicultural setting of surrealness.

The unique film, shot in 1:33 ratio in the tradition of Charlie Chaplin and Buster Keaton, finds Burgers remaining completely silent while other characters around him speak in foreign languages without subtitles. It's sure to be a standout at this year's festival, and we spoke with the film's creator and star ahead of the screening to find out more about this unique project. 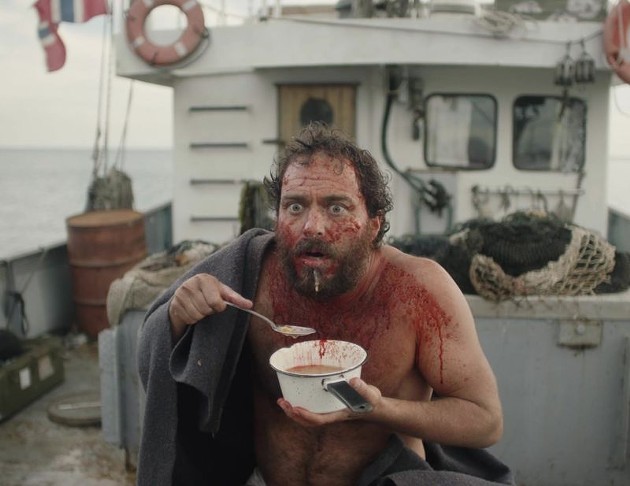 How did the idea for this film come about?

I've had a lot of experience doing live stuff, and I've done a lot of one man shows. Often they wouldn't have a lot of talking in it, so it was all very visual and telling stories through actions. So I kind of had developed this skill, if you will, to communicate without words and play without words. As a creative challenge, I thought it would be fun create a film where I didn't speak. And instead of it being a sort of contrived silent film, I had to figure out another way for it to feel natural.

It became this idea of not being able to understand the languages around me, and therefore I couldn’t speak. I live in Los Angeles, and it’s an extremely diverse city. Every culture has their neighborhood, like Little Tokyo and the biggest Iranian population outside of Iran. They all maintain their culture here. And I live within my, kind, of hipster existence and I’m not really a part of that. But I’m always very curious and I want to be part of it.

And there’s another element of isolation, and wanting to be part of something. I do feel very isolated from the communities that I’m surrounded by. So then it was like, I’m not going to speak and I’m going to enter into these cultures with languages I don’t understand. So the marriage of those two concepts happened very organically.

If you had to do an elevator pitch for people who haven’t seen the film yet, how would you sum it up?

If you could see me now, I would just pretend to be in an elevator, press an imaginary button, and move my body down [laughs]. That's a really tough question. Hopefully the work speaks for itself, but it's just about one man on the run from two mysterious people who are chasing him. He gets chased from culture to culture, and within each culture he makes a connection of sorts.

Tell me about shooting the movie in long, one-take scenes. What was the process like of choreographing that kind of thing?

That's more challenging than doing a lot of coverage, because the stakes are raised. We can't afford to say, "Oh, we'll just cut there." It really turns you on when you're on set. With higher stakes, it's just more exciting as a performer and as a filmmaker.

Because you don't get the chance to have a bunch of takes.

Exactly. It's really challenging and creates a lot of limitations, so it's just fun to create something within those limitations.

So was there any level of spontaneity involved, or was it all very much blocked and choreographed? Were there moments that just sort of happened when you were on set?

It was very precise and choreographed! But we found all of it through a lot of improvising. It was all very much choreographed.

When you're preparing for this kind of role as an actor, are you at home rehearsing in a mirror? What's that process like?

Not at all! A lot of it comes from my live background, and I would always develop shows in front of an audience. The audience would tell me whether something was working or not based on whether or not there was laughter or engagement.

In our everyday world, you don’t spend your whole day talking. So it’s not that I’m doing these stylized movements - I’m just moving like any other person would move. People move very naturally and they do it all day long, and they’re interesting in the way they do things. Not just the things they say. So again, it’s not stylized. It’s just, like, what you would do if you burned your hand on a barbecue or were rowing a boat or something.

What do you hope that people will take from a film like this, in any aspect?

Maybe just a sense of wonder, you know? Hopefully it just opens their imagination and they realize, “Wow, the world is really big and diverse and exciting.” Ultimately it’s entertainment, but in a way that’s really exciting. I want it to be imagination-provoking, instead of thought-provoking. Imagination-opening!