Documentary explores the life and times of Ruth Bader Ginsburg

ONE of the most well-received documentaries of 2018, RBG is a personal look at the life and contributions of the one and only Ruth Bader Ginsburg, the Supreme Court justice known by her legion of fans as "The Notorious RBG."

An entire pop culture cottage industry has sprung up around branding the soft-spoken but diamond-tough 85-year-old legal mind as a role model not only for women and senior citizens, but for any American concerned with equal rights and justice under the law.

RBG screens at the SCAD Savannah Film Festival at 1:30 p.m. Sat. Oct. 27. We spoke with director/producers Betsy West and Julie Cohen about their film. They will conduct a Q&A at the screening.

RBG was already a very well-received film, but it seems like the recent Kavanaugh confirmation controversy will only increase interest and engagement.

Betsy: When we started thinking about this film it was a very different time. We began it almost four years ago, before the whole change in the political landscape, before MeToo, and long before the recent battles over the Supreme Court.

But it has become even more relevant because of Ruth Bader Ginsburg’s absolutely groundbreaking role as a litigator in the women’s movement, and because of the sense of democratic values—with a small ‘d’—that progressives are rallying around. The recent controversy about the Supreme Court has only increased the film’s relevance.

A video made the rounds recently of Justice Ginsburg somewhat cryptically saying the confirmation process was much better when she was confirmed than it is now.

Julie: It’s important to remember that those comments were made before the sexual assault allegations. It was more of a level of protest at what she viewed as tougher questions than are needed on how a justice might rule on particular cases.

Some people on the right started tweeting about it as if she were talking about the sexual assault allegations, but she said the remarks prior to that. You have to keep in context of when she made the remarks. 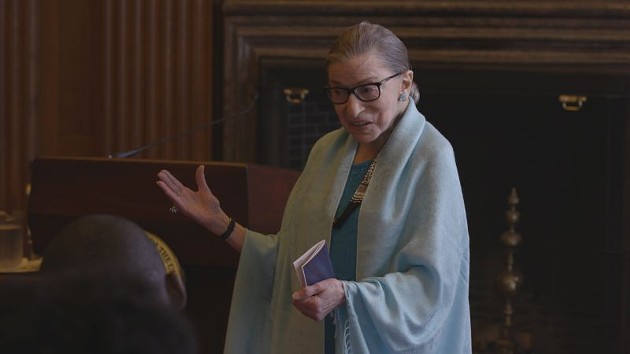 Some critics focused on the positive tone of your film, almost to apologize for it not being grim enough. How do you feel about your documentary being described as “feel good?”

Betsy: I don’t hate it if people come out inspired by her life! The heart of the documentary is about her important work in the 1970s to secure equal rights for women. Many are unaware of what she had done. So in that sense it’s not so terrible for someone to leave the theatre feeling really good about what they’ve just seen.

Julie: The film is predicated in part on making people feel good. From the beginning we had two main goals: To illuminate issues of women’s rights, and we specifically said we wanted to make people feel good about what they were seeing.

Betsy: It’s been inspiring for us throughout the process to look at the challenges she faced throughout her life, and how she in her very detailed, brilliant and strategic way triumphed over these challenges, both personally and professionally. It’s been great for us to work on this film at this particular time in our country.

And the notion that a judge in her 80s is such a huge and genuine pop culture icon has got to be an irresistible storyline.

Julie: That element was really important for us to focus on. Of course we’re using a lot of historical material, because we set out to document her in all phases of her life, but never to lose sight of the soft-spoken but very tough person that she is.

But when 22-year-olds are screaming when she walks by as if she is a rock star, that is really quite a story. It’s mildly hilarious as well of course, but really it’s pretty cool. In this time when celebrities are mostly valued either for being athletes or musicians, here we have a woman icon who is admired for her intellect. And that’s really amazing and wonderful.

Some analysts predict Justice Roberts might essentially replace Justice Kennedy as a swing vote. Do you have any insight into that, given your interviews with Justice Ginsburg and others?

Betsy: Ginsburg has described herself in the past as a moderate and has been considered moderate. If you look at recent opinions you could make the case that Roberts will end up somewhere in the middle. But at this point it’s still a mystery.

The film delves into the friendship between Justice Ginsburg and the late Justice Antonin Scalia, who had two opposing ideologies for the most part. That is fascinating.

Julie: I’m glad you want to talk about that, because it’s a great story. She and Scalia had a decades-long friendship that was absolutely deep and genuine. We were a bit skeptical of that in the beginning, but we learned it was a genuine friendship.

You have to remember they became friends in the ‘80s when they were both on the DC Circuit Court. Because of the nature of that particular circuit they tended to take many cases of regulatory law. There was a huge amount of questions of a much more technical legal nature, rather than what we might consider more hot-button issues. So the truth is they actually agreed on the vast majority of cases they ruled on together.