A.M. Lukas and Meena Singh bring One Cambodian Family Please For My Pleasure to the Lucas 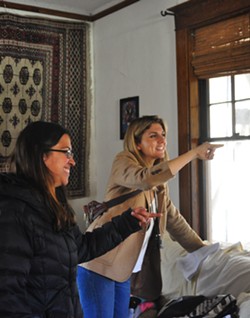 Meena Singh, left, and A.M. Lukas on the set of One Cambodian Family Please For My Pleasure

FILMMAKER A.M. Lukas brings her warm, insightful One Cambodian Family Please For My Pleasure to the SCAD Savannah Film Festival.

The 13-minute short examines the crosscurrents of what it means to be an immigrant — and what community means — in North Dakota, as one refugee from communism advocates for the rights of refugees from the Cambodian genocide.

Based on a true story, the film is part of the unique and much-needed Shatterbox collaborative series from TNT and Refinery29, an effort to showcase the work of women filmmakers from all aspects of the industry.

Lukas’s cinematic partner is director of photography Meena Singh. We spoke to both of them recently about the film and about women in the industry.

Your film is wonderful, and so authentic. Clearly this is a very personal story for you.

A.M.: It's about my own life, and my own memories of childhood as the daughter of immigrants. That and the harsh landscape lent themselves to a good story.

Meena: We both grew up in the Midwest, and I guess we both tend to gravitate back to that landscape.

A lot of reviews have called it a “quirky” film, but that seems sort of lazy. It’s really quite down-to-earth. Do you think quirky is a complimentary description?

A.M.: I hear the quirky label a lot, and I guess I do sort of resent it. I mean, it's true to life, and if quirky is supposed to mean singular, then yeah I guess it's quirky!

It’s really unique and amazing, and it’s as much Meena’s story as mine — we’re both first generation Americans pulling inspiration from our family stories and experiences.

Tell me about your involvement with the whole Shatterbox campaign to increase women’s participation and presence in the industry.

Meena: I tend not to approach it from the perspective of "I'm a woman." I'm interested in the things that move all of us. I want to be known as a filmmaker first.

AM: I had a real revelation early on in this business when I realized it took me literally ten years longer to get where I am than if I had been born a man. And it’s not just a concrete thing — it’s an internal thing. You internalize that message. And the outside barriers are definitely there too.

That’s why the progress we’re seeing now is so important. There is the larger issue of unconscious bias toward women, which is also internalized by women. Geena Davis has said and written a lot about this issue.

We’ve all internalized these things. I noticed that in my work for sure. In retrospect, looking back on things I wrote years ago, I was automatically writing fiction in the first person male voice. In a way maybe I thought that was the trick to making people think I was a “real” artist. And coming up in the film business, it did take me ten years longer than it would have a man. So many stars had to align for me.

It made me embarrassed and sad, both for myself and for all the other women who’ve had to go through this. That’s why I’m so passionate about women being more involved in the business — a lot of what we do, we do for women younger than us, just coming up.

Meena, you must feel this even more keenly. I suspect it’s even more difficult to be a woman cinematographer than to break through in directing.

Meena: I think something like three percent of directors of photography are women, which is pretty staggering. Of course since it's considered a more technical field, there's an assumption that you just have to be a man to do it.

The technical side has always been more dominated by men, but I welcome the challenge as one of the few females doing cinematography.

When I was starting out, someone took me aside and said, you know this is a boy’s club. They were trying to help me, to warn me. That was the first time I ever thought about it. Along the way there have been challenges, especially if I’m working over older men. It can be hard on their egos.

It’s sad and poignant that our mothers and grandmothers were in a way just born a little bit too early. They just missed the time when women could fully realize themselves professionally. As much work as still needs to be done, it seems like those old days are gone forever.

A.M.: I hope so. Our generation was raised to believe things are and should be equal. I see this struggle reflected in a lot of aspects of our world. There is so much more awareness than there ever has been, of just how white male this business is. Frankly I didn't see this change happening, but I guess maybe 7-8 years ago I became aware of things beginning to change.

You two are a great collaborative team. More projects on the way?

AM: We're lifers. That's my dream anyway. I think it was meant to be, a kismet sort of thing.

Meena: When you find something this good, a collaboration that works really well where we both come from the same place, it’s really nice.

AM: Meena is such an incredible storyteller. She makes me cry sometimes!